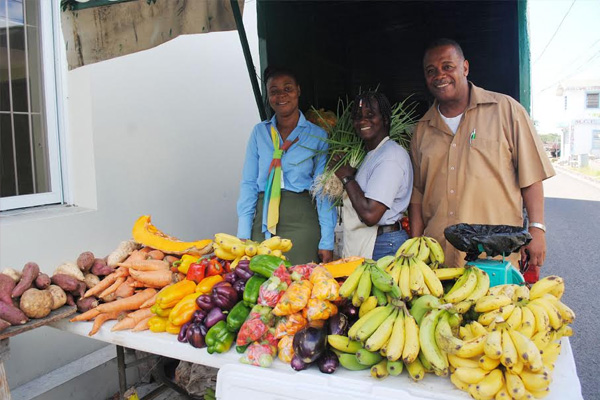 CHARLESTOWN, NEVIS — The Department of Agriculture on Nevis celebrates a major milestone with the holding of the 20th anniversary of its now popular annual Agriculture Open Day on March 27-29 at the Villa in Charlestown with award-winning farmer Mrs Emontine Thompson and her Husband William as the patrons.

The theme chosen for this year’s Open Day is ‘On the Road to Food Security, Open Day 20’, and there was not a better person to be named the patron than Mrs Thompson who recently returned from the US Virgin Islands where she participated in the St. Croix Agriculture Exhibition, and emerged as winner in the off island exhibits, the fourth time she would have won the title.

“Mrs Emontine Thompson and her husband William are model farmers who have been an inspiration to their colleague farmers and also consumers of the food that they produce,” said Ms Hyacinth Pemberton, acting manager of the Nevis branch of the Development Bank of St. Kitts and Nevis

“The fact that the Development Bank of St. Kitts and Nevis has a large farming portfolio, Mrs Thompson and her husband have worked closely with us to ensure that Nevis attains food security, which happens to be part of this year’s theme. The partnership between the Development Bank and this hard working couple has worked wonders for the island of Nevis.”

According to Ms Pemberton, the Department of Agriculture was right in naming Mrs Thompson along with her husband as the patrons for this year’s activity, adding that even members of the farming community have recognised their prowess in the field of agriculture as she has been the President of the Nevis Growers Association for the past 18 years.

Permanent Secretary in the Ministry of Agriculture in Nevis, Mr Eric Evelyn, said that they have been choosing a patron for the Open Day activity over the years, and this year being an important milestone, they had to ensure that they picked an outstanding farmer and one who has been with the Open Day for the past twenty years.

“Of course the other fact is that she has been exemplary in terms of representing Nevis in St. Croix. This year she has won for the fourth time in succession the first prize for the Off Island Exhibits and we believe that is an extremely good achievement and of course when we were choosing the Open Day patron we bore all that into consideration and we thought that Emontine, and her husband, would be the best to choose for the patron for such a milestone.”

Mrs Emontine Thompson, who currently farms about seven acres of land at Prospect and Brown Hill, attributes her trademark success in farming to her mother, Mrs Ruth Ottley Liburd who used to do farming in the Rawlins Mountains, the Department of Agriculture, and the Development Bank of St. Kitts and Nevis.

“I did not choose farming – I grew up into farming,” said Mrs Thompson. “But when I got married we travelled off island to different countries, and then when I returned home with my children it was very expensive feeding them and I started utilising the back yard garden to grow some food.”

Since that was a small plot she approached her extension officer Mr St. Clair Williams who put her through to the then Director of Agriculture Mr Augustine Merchant and she was allocated a one acre plot in Prospect below the abattoir. After she proved that she was productive, she was allocated the land behind the offices of the Ministry of Agriculture, also in Prospect.

“I have been attending the Open Day in Nevis, I only missed one,” said Mrs Thompson. “Mr Evelyn said that I was the fittest person to be the patron, so I just leave it as that. However, I am thinking that we as the Nevis Growers Cooperative should share the glory. I believe my other counterparts will be happy and as the president I think it is very important we lead in this aspect of farming.”