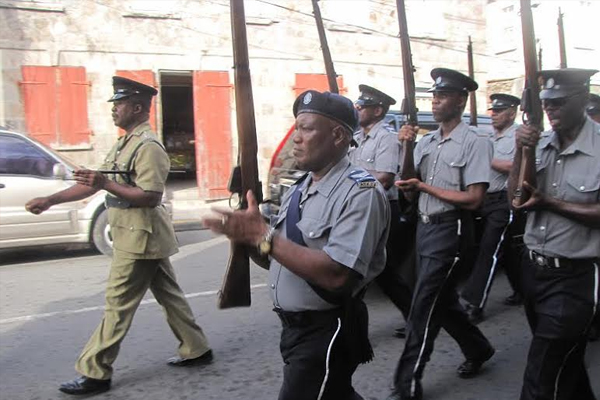 Basseterre, St. Kitts — On Tuesday 17th June 2014 the Division C held a Commissioner of Police Parade and Route which commenced at 4:00 pm at the Elquemedo Willett Park. The purpose of the parade and route march is to sharpen the drill skills of the officers, demonstrate strength and unity among the officer, encourage the community to support the police, showcase the force’s presence in the community in a different way, and improve discipline among the junior ranks.

The parade left the Elquemedo Willett Park and walked along the Island Main Road on the Route March to D.R Walwyn Plaza where Deputy Commissioner of Police Stafford Liburd flanked by Assistant Commissioner of Police Robert Liburd, Superintendent Hilroy Brandy and ADC Inspector Lyndon David, took the salute as the parade march past the saluting dais.

The parade end at the Nevis Island Administration Building where Deputy Commissioner Stafford Liburd spoke with the officers. He first thanked them for making the parade and route march a success for be present. He told the officers that there are concerns of the recent spike in robberies in the division even though overall crime is down, however, he told the officers that patrols have increased to increase police presence in the community, to be more proactive as Culturama approaches, and through the use of technology and forensic, and intense collaboration between St. Christopher and Nevis Divisions the Force has seen success recently in two (2) murder cases that occurred in the Nevis Division in 2013.