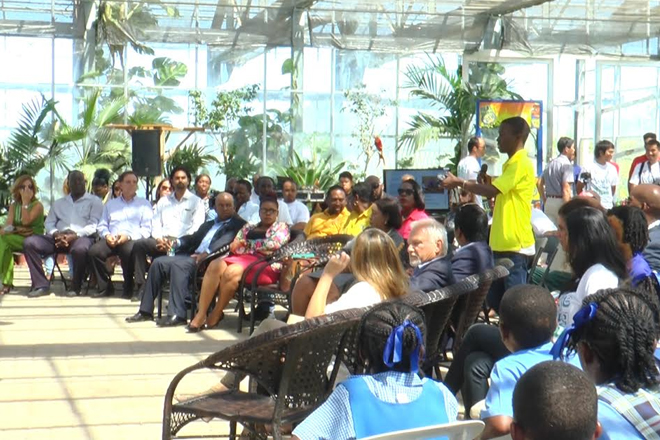 (ZIZ News) — Climate change and the impact on the nation’s economy was one of the main topics highlighted at a ceremony on Wednesday morning, to officially launch Earth Week skn.

The St. Kitts Eco Park was the site for the official medial launch of Earth Week skn which brought together several high level government officials and other invited guests for the event.

According to organizers, the launch aimed to raise awareness and highlight the effects of climate change and ways in which citizens and residents can make a positive influence on the economy and in the community.

Resident Taiwanese Ambassador, His Excellency George Gow Wei Chiou noted that the Eco Park itself is a symbol of harmony between man and the environment.

Minister of Tourism the Hon Lindsay grant spoke of his ministry’s initiatives that fall in line with the aims of Earth Week SKN.

“For all of the hotels, we have conducted energy audits. Simply put, we have conducted audits to make sure that the energy output by these hotels is lessened. Anything we can do to reduce energy consumption that is possible, we are making sure that that is being done. So we are helping in that regard,” he said.

Minister Of Public Infrastructure, The Hon Ian “Patches” Liburd said climate change has been a major factor in the water shortage the country has experienced and his ministry has taken steps to address the issue.

The Earth Week SKN Movement, will showcase a number of activities and events. These include Climate Educational Week, major sports events, and an Earth Day Celebration.

Activities Will Run Until April 22.