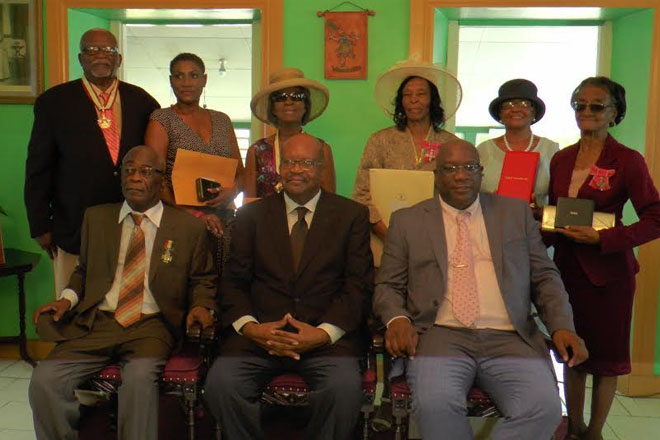 (ZIZ News) – It was a proud day for some of the nation’s most dedicated public servants and their families as they were honoured during an Investiture, hosted by the country’s Acting Governor General, Tapley Seaton QC.

Held at Government House, the ceremony served as a combined awards ceremony with 2015, 2014 and 2013 awardees.

Nevis’ First Premier, the Late Rt. Hon. Sir Dr. Simeon Daniel posthumously received the Order of National Hero Award for his contribution to the field of politics and law. That award was accepted by his wife, Sheila Daniel.

Sylvia Viola Manning received her award for work in the area of public health while Lorna I. Richards was awarded the Most Excellent Order of the British Empire [MBE] in 2014 for her work in public service.

Clement David Obadiah Williams, also known as Bouncing Williams, received his award for work in science, education and culture while Venetta Henry received the Medal of Honour for her work in nursing and community service. That award was accepted by her daughter, Carlene Henry-Morton.

The final award recipient was Dawud St. Clyde Mudada Byron who also received the Medal of Honour. That came for his work in journalism and music.

Following the ceremony, the country’s Prime Minister, Hon. Dr. Timothy Harris told our production team that it was a meritorious selection of citizens.

“I want to join with the Governor General in extending heartfelt congratulations to all those who have been selected for high national honours,” Dr. Harris stated. “Today, through the Investiture, we sought to publicly give the acclaim, the respect and the honour that these deserving citizens require at this particular time.”

Dr. Harris said it is important to remember people’s work and contribution to national growth and development.