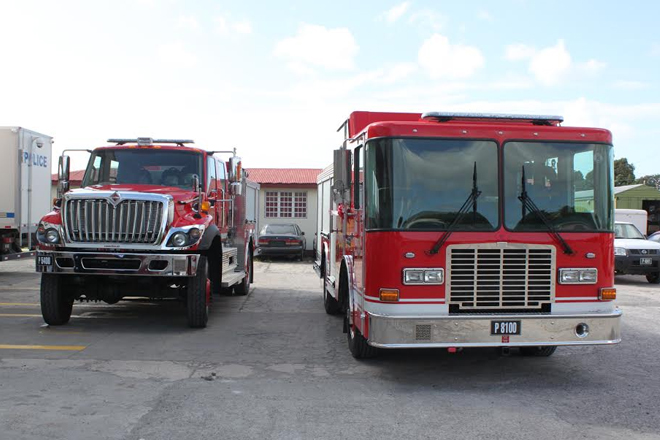 (ZIZ News) — The Fire Department has gotten a major boost with the acquisition of two new fire trucks.

Fire officials and other government representatives gathered at the Basseterre Fire Station for a ceremony to officially commission the two new fire trucks.

The government bought the vehicles from Indocom Limited at a cost of about 2 million dollars.

During the ceremony Chief Fire Officer, Everette O’Garro, said this is part of a fleet renewal plan that will replace aging fire trucks currently in use.

“This initiative, which has now received the full support and backing of the present government is part of a master plan that is geared towards enhancing and improving the effectiveness and efficiency of the Fire and Rescue Services,” he said.

According to the Fire Chief, the acquisition represents a major investment in their effort to provide first rate service to the Federation and is an upgrade to their current fleet.

“The two trucks were manufactured with multi-capabilities. Combined they have an extinguishing capability of 1,500 gallons of water and 250 gallons of secondary media. This secondary media now gives us the ability to tackle flammable liquids and hydrocarbon fuels,” he said.

Permanent Secretary in the Ministry of National Security, Osmond Petty said the new trucks are part of government’s commitment to continuously develop the Fire and Rescue Services.

He said “I wish to assure you all that the Ministry of National Security and by extension the government of St. Kitts and Nevis will continue to invest in providing resources, not only fire trucks, but also other firefighting equipment, as well as training opportunities for fire officers in the St. Kitts and Nevis Fire and Rescue Services.”

The trucks have a total capacity of 1500 gallons. One of which can carry 250 gallons more than the previous models.

One vehicle will be stationed at the Sandy Point Fire Station and the other at the Basseterre Fire Station.