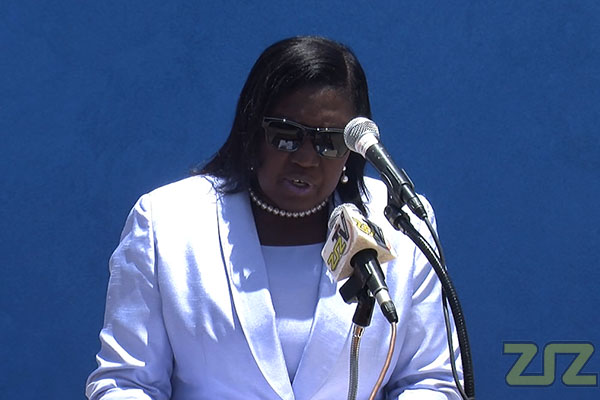 ZIZ News — Permanent Secretary in the Anti-Crime Unit, Her Excellency Astona Browne, says Tuesday’s opening of De Zen House at the Police Training Complex, represents a partnership that will result in the improvement of the physical environment of female officers.

Browne said her government had partnered with several businesses to ensure the continued development of the Royal St. Christopher and Nevis Police Force, through crime fighting.

She listed some of the initiatives that had been taken to date.

“You have heard mention of the Safety and Security Improvement Programme that is currently being implemented under the 10th European Development Fund. It is in partnership with the European Union that our plans for the construction of the future home of the multi-purpose training centre in Lime Kiln will soon become a reality,” Browne explained.

She told the audience that it was important for the government to be mindful of the need to create an environment that fits the sustained economic growth and development that St. Kitts-Nevis was pursuing.

“You would have witnessed, a few weeks ago, the turning of the sod in preparation for the construction of the new site of this training academy. I see today’s [Wednesday] event through the same lens as we fulfil our vision to realise key components of our national adaptation strategy where focus on the security sector is critical, given that it is inextricably linked to the successful implementation of our national development agenda,” Permanent Secretary Browne added.