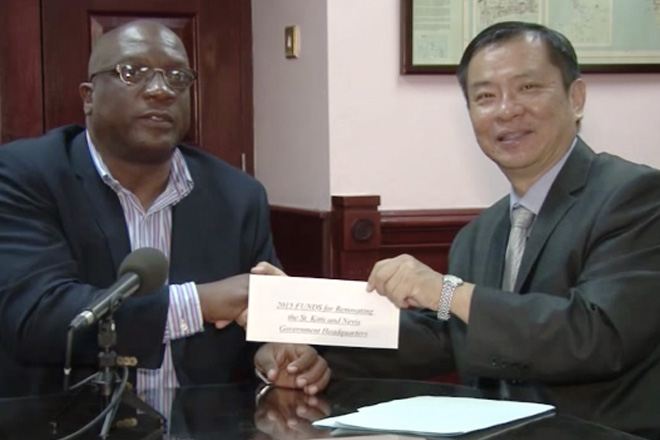 (ZIZ News) — Government Headquarters in Basseterre is set for a major overhaul.

This comes as the local government has secured funding for its renovation from the Republic of China on Taiwan.

On Saturday (6th June), the Taiwanese Ambassador, acting on behalf of the Government of Taiwan, presented a check to the Team UNITY-led Administration to facilitate the renovation work.

“This building is certainly in need of a face-lift and it is good that at this time, that we are able to procure the resources which we shall put to good use in renovating property inside and outside and adding other things that enhance the value of this property,” he said.

Dr. Harris used the opportunity to commend the Government of Taiwan for its continued support and assistance to St. Kitts and Nevis.

Taiwan’s Resident Ambassador, His Excellency George Gow Wei Chiou pledged his government’s commitment to strengthening the bonds between both nations.

He said, “We have done similar jobs in agriculture, tourism, solar energy and also IT training and we are looking forward to doing more jobs and more cooperation projects with the Prime Minister and your government.”

Taiwan was the first country with which St. Kitts and Nevis established diplomatic relations after becoming independent.