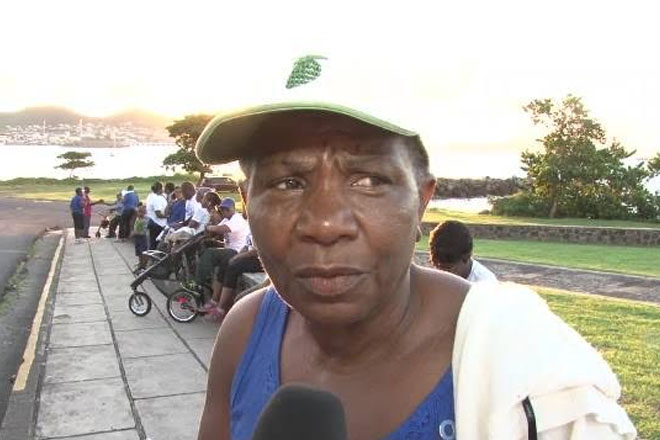 (ZIZ News) — The official observance of World Diabetes Day ended on Saturday with a health walk which saw persons walk from the Cenotaph, along the Bay Road, to the Eastern Caribbean Central Bank, and back to the Cenotaph.

While speaking with the media, President of the St. Kitts Diabetes Association, Nurse Christine Wattley said it is important that persons take this year’s theme seriously.

“The theme for World Diabetes Day 2015 is Healthy Eating. We’re encouraging persons to eat healthy,” she said, adding “You can eat all the foods from the six food groups but watch the portions, watch the amount you eat at any given time.”

The Association’s Public Relations Officer, Dr. Reginald O’Loughlin also participated in the walk, which saw some persons dressed in blue tops and others wearing white t-shirts with blue text.

He called on more residents of St. Kitts to join the Association.

“We want to encourage people to join the St. Kitts Diabetes Association, especially people who are afflicted and affected by this particular disease because we figure together, we are stronger and this can help us to fight this particular disease,” he explained, just before he encouraged persons to attend Sunday afternoon’s Annual General Meeting which is planned for 3pm at the Old Girls School on Victoria Road.

In a show of support for healthy living, the country’s Minister of State responsible for Health, Hon. Wendy Phipps also participated in the walk.

She said, “the credit should be given to the St. Kitts Diabetes Association for staging this walk,” adding that “the government is happy to partner with them, through the Cabinet and more specifically, through the Ministry of Health.”

Minister Phipps was joined by the country’s Prime Minister, Hon. Dr. Timothy Harris, who praised members of the youth population who had participated in the health walk.

“I want to congratulate all the young people. Indeed, this event drew more young than it did old,” he said, adding that “lifestyle does in fact matter and the earlier we start in getting it right, getting it right with what we eat, how we eat, getting it right in terms of our own physical activity and keeping not just the body well but mentally attune, the healthier we would be for the rest of our lives.”