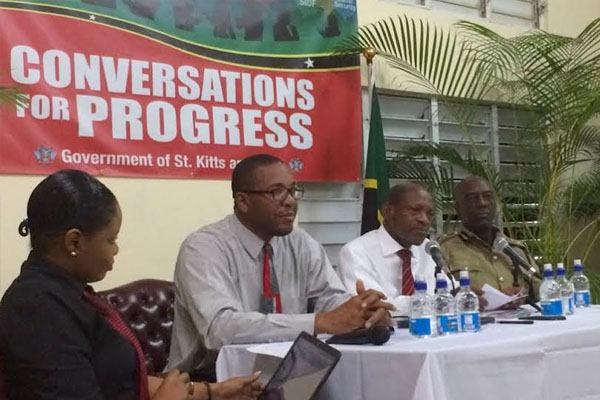 Basseterre, St. Kitts (SKNIS) — Sports is alive and well in St. Kitts and Nevis and has played an important role in the development of the twin-island Federation and its people.

That was a key message emerging from the latest town hall meeting in the series dubbed “Conversations for Progress.” The St. Peter’s Community Center was the venue for the meeting on Wednesday night (July 30) which saw presentations from Prime Minister the Right Honourable Dr. Denzil Douglas, Minister of Sports Honourable Glenn Phillip and Commissioner of Police Celvin G. Walwyn on topics related to sports and crime.

“The national agenda for sport continues to broaden the opportunities for our young people as well as to build community spirit through family members and fans who rally around the sons and daughters of our respective communities,” said Minister Phillip.

Included in this agenda is the upgrade and maintenance of facilities. Improvement projects have been carried out at several venues, including the Silver Jubilee Athletics Stadium which hosted the OECS Track and Field Championships in early July 2014 and is scheduled to hold the 2015 CARIFTA Games after successfully hosting the 2008 edition. The refurbished Warner Park Cricket Stadium will welcome some of the world’s best players in August as it hosts several matches including the semifinals and finals of the Limacol Caribbean Premier League (CPL) T20 tournament. On August 25, cricket continues as the West Indies and Bangladesh teams play a One Day International followed by a Twenty20 match two days later. A special basketball contest organized around the Federation’s 31st Independence anniversary is also scheduled for September.

Minister Phillip explained that the success of the sector was due in large part to the advancement in the informatics infrastructure and growth of top-class sports venues between 1995 to present. He also highlighted the airlift capacity which transfers teams and fans to and from the island as well as the “excellent delivery track record” achieved through hosting successful international event such as the Caribbean Festival of Arts (CARIFESTA) and the ICC Cricket World Cup 2007.

Prime Minister Douglas stated that there are many life lessons that can be learnt through sport and emphasized that it builds a person’s character and values. He also referred to the personal health benefits that active individuals enjoy as opposed to someone who is not active and cited the growing sports tourism industry which generates economic activity across the country.

“Sports then is far more than meets the eye,” the Prime Minister stressed. “The benefits at an individual, societal, financial and economic level are substantial and that is why it has been and will continue to be such a priority in the development focus of our proud and progressive nation.”