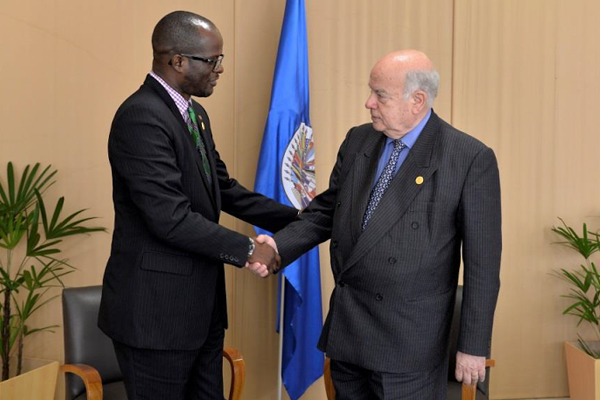 Bassetrre, St. Kitts — The Honourable Patrice Nisbett, Minister of Foreign Affairs of St Kitts and Nevis, addressed the 44th Regular Session of the Organisation of American States (OAS) General Assembly in Asuncion, Paraguay on June 4th and called on the OAS to resolve the challenge of social inequality while highlighting St. Kitts and Nevis’s development.

In his second address to the annual gathering of OAS Foreign Ministers since assuming office in 2013, Minister Nisbett focused on the Assembly’s theme of “Development with Social Inclusion”. He stressed that marginalised and vulnerable populations must be allowed to strive within a society which sees all citizens as equal. He further noted that our “states must be the engines of meaningful and practical growth opportunities and must empower our citizens to recognise and take advantage of such prospects so that our hemisphere can reap the rewards” of having a participatory democracy. The Honourable Minister articulated to the hemispheric body that St. Kitts and Nevis has designed the necessary strategies to overcome the challenges it faces and is moving forward to create a healthy and sustainable future for its citizens.

Minister Nisbett also emphasized the Federation’s ongoing need to partner with international organisations including the United Nations and the OAS in order to address the vulnerabilities which face Small Island Developing States (SIDS) such as ours. He underscored that having “worked diligently to provide subsidised health care for children and the elderly”, the Government of St. Kitts and Nevis has now pivoted towards establishing a green economy. The Minister shared with fellow Ministers of the Americas the various solar, wind and geothermal projects and initiatives that have been implemented throughout the twin island federation. Minister Nisbett also took the opportunity to stress the ways in which St. Kitts and Nevis has been bridging the digital divide through the implementation of the “one lap top per child” policy.

The Honourable Minister concluded his remarks by assuring the OAS that St. Kitts and Nevis is committed to being an active member of the hemispheric team in working towards the realization of the Organization’s goals, including Development with Social Inclusion.

Concurrent to the Minister’s statement and the Federation’s normal participation at the General Assembly, this year was particularly unique to St. Kitts and Nevis, as Chair of the OAS Permanent Council, one of the main political bodies of the Organization. In the lead up to the 44th General Assembly, Ambassador Henry-Martin, was quite instrumental in facilitating the negotiations and preparations. Additionally, her skills and finesse as a former Parliamentarian, served highly useful in efficiently chairing the proceedings of the General Committee while at the General Assembly. This Committee had the seemingly unending task of negotiating over 15 draft Resolutions. However, Ambassador Henry-Martin, with her optimistic and energetic demeanour, managed to caress the negotiations, which resulted in all being completed, in record time, to deliver to the Foreign Ministers.