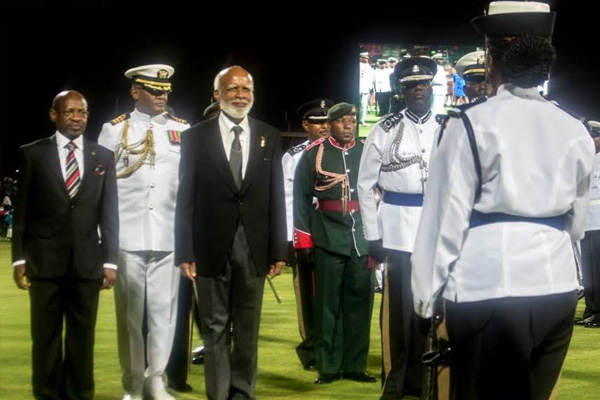 The Federation’s Prime Minister, the Right Honourable Dr. Denzil Douglas was welcomed into Warner Park with thunderous applause as he, along with Governor General, Sir Edmund Lawrence, members of the Federal Cabinet and other dignitaries witnessed the 31st Independence Anniversary Ceremonial Parade.

ZIZ Radio and Television’s live commentary team, who covered the event, made several references to the massive crowd that engulfed the cricket stadium and portions of the grounds.

Various armed and unarmed units from organizations including the Royal St. Christopher and Nevis Police Force, The Cadet Corps, The Customs and Excise Department, The Girl Guides and Brownies, The Shadwell Overcomers and The Seventh Day Adventist Church Pathfinders participated in the Independence Ceremonial Parade.

Meantime, the St. Kitts-Nevis Defence Force Band received high praise as it kept the audience entertained with an unusual selection of songs, the most unique of which was Fantastic Tunda’s “Run Tunda Run.”

Shortly before midnight, Prime Minister Douglas stepped to the podium and delivered his official Independence address to the nation. During the well crafted and orated speech the phrase, “There is good reason to celebrate,” was repeated often. The audience cheered loudly in support of the Prime Minister who announced several gifts for residents including the write-off of all electricity arrears for residential customers prior to 2011.

At exactly 12:30am, immediately following the Prime Minister’s address, those present at Warner Park Stadium were treated to a spectacular fireworks display.

The Ceremonial Parade was followed by a toast at the Defence Force Headquarters at Camp Springfield.

St. Kitts and Nevis’ 31st Anniversary of Independence is being celebrated with a month of activities under the theme “A Nation on the Move: Celebrating Our Progress.”