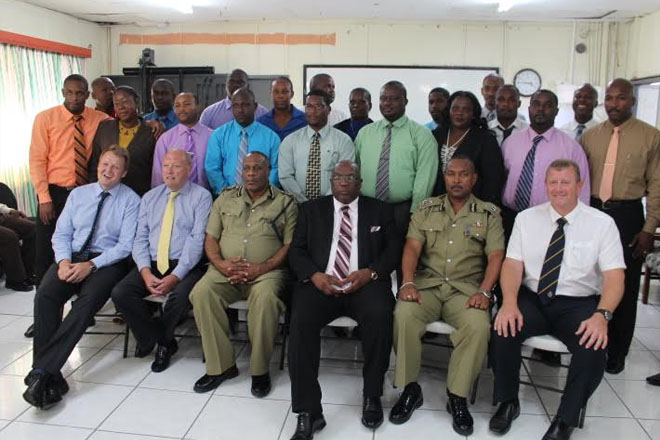 The course wrapped up with a closing ceremony at the Police Training School on Wednesday afternoon.

The goal of the course was to enhance the skills of the investigative units, including the Criminal Investigations Department and the Violent Crimes Unit.

Robert Varey is a retired police officer from the United Kingdom and one of the facilitators for the course.

He said continuous training is essential to law officers’ development.

“There’s always a need for training. We were invited to come and train the officers on specifics around crime scene preservation. I think there is considerable experience here. The big challenge will be if the students can take what they’ve learnt here into the field and implement it,” he said.

Another facilitator, Steve France of the Bramshill Police Advisory, praised the officers on the progress they had made over the past two weeks.

“Having briefed every day your trainers, having spoken to Superintendent Mitchell, and even having had the honour, albeit dubious, to have attended the murder scene on Nevis last Friday, I am more than convinced that you are now equipped to take the challenge back to them,” he said.

Prime Minister, the Hon. Dr. Timothy Harris presented the certificates to the participants.

Delivering brief remarks, he pledged his government’s commitment to the safety and security of the nation and that included the continuous development of the security forces.

“By bringing to the support of the police force and the agencies of law and order the best that the country could afford in terms of specialized services and expertise, knowledge and know how, the government is attempting to fulfill its most important mandate, to keep the residents and citizens of this beautiful country safe,” he said.

Participants were drawn from various arms of the security forces in both St. Kitts and Nevis.