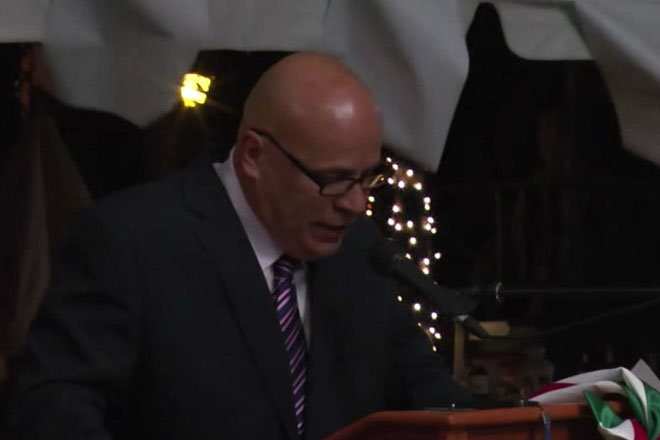 (ZIZ News) — His Excellency Jose Rosa is the first Resident Honorary Consul of Mexico to St. Kitts and Nevis.

Rosa was installed during an impressive ceremony at Palms Court Garden on Tuesday night. His installation also marked the opening of the Honorary Consulate of Mexico here.

Minister Richards spoke on behalf of Prime Minister, Hon. Dr. Timothy Harris who is away on government business. He said Rosa and Dr. Harris maintain a close relationship which mainly focuses on trade opportunities for St. Kitts-Nevis and countries within South America.

“That relationship would have borne fruit largely via Mr. Rosa’s firm advocacy of the critical need for our Federation to improve access into the South American market for high quality goods produced right here in the Federation and to introduce consumers to a relatively lower cost jurisdiction for the importation of manufactured goods and foodstuff besides our traditional import markets of the USA and the United Kingdom,” he said.

Minister Brantley spoke of the strong bond between St. Kitts and Nevis and Mexico and said Rosa’s appointment, and the decision to open the Honorary Consulate, is proof of this closeness.

“Ladies and gentlemen, St. Kitts and Nevis attaches incredible significance and value to its deep friendship with Mexico and the strength and bonds of fidelity between our two countries is demonstrated here this evening with the opening of the first Consulate of Mexico here in St. Kitts. Relations between St. Kitts and Nevis and Mexico are extensive and enduring at both the bilateral, regional and multilateral levels,” he said.

During his remarks, Mexico’s Ambassador to the OECS, His Excellency Luis Manuel Lopez Moreno said his country’s President wants a closer relationship with OECS countries.

He spoke highly of the new Honorary Consul, who is a businessman from Puerto Rico.

“This Consulate would be headed by a distinguished Puerto Rican businessman who all of you know for his track record as an entrepreneur and as a Hispanic cultural promoter or as we would say in a more understanding way, a tireless Latin American man that promotes the real real Latin American culture in the region, Mr. Jose Rosa,” he said.

Rosa, in response, described his appointment as an honour and said he appreciates the confidence that the Mexican Government has placed in him.

“Tonight’s opening ceremony of the Consulate of Mexico in St. Kitts and Nevis is an initial step in my duties as Honorary Consul. I pledge to undertake the responsibilities assigned to me with honour, dignity and respect to both governments. It is my intention to work as a liaison between the Embassy in St. Lucia and the Government of St. Kitts and Nevis. I will strive to promote commerce and tourism in order to strengthen the relationship between both countries,” he said.

Rosa also pledged to assist Mexicans residing in or visiting St. Kitts-Nevis. He said they have an Honorary Consul on whom they can depend.