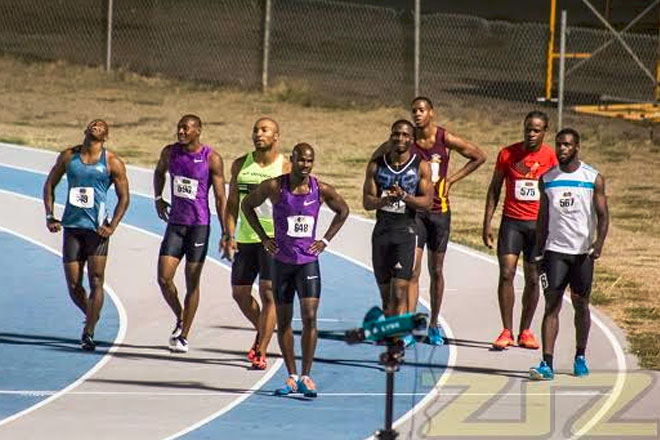 (ZIZ News) — It was a clear case of experience over youth, as national sprint icon Kim Collins dominated the 100 metre event at the 2015 National Junior and Senior Championships on Saturday.

After running a wind-aided 9.94 seconds in the first of the 100 metre heats, the veteran, Collins, came back in the finals with another sub-10 second performance.

Running against the likes of 2014 National Champion Antoine Adams, Jason Rogers and Brijesh Lawrence, Collins fought his way back from a rocky start to win the event and proved his stature as the fastest man from St. Kitts and Nevis.

Running side by side in lanes four and five, Collins and Adams gave the fans a show to remember.

Rogers and Lawrence both got off to fast starts, out of the blocks, but in the final meters, it came down to the two fastest men in the Federation.

In the end, Collins finished in a time of 9.98 seconds with Adams taking second place in 10.03 seconds.

Lawrence’s effort paid off as well as he earned a third place finish in 10.15 seconds.

Speaking afterwards, Collins said it is always great when he can come home and put on a show for the fans.