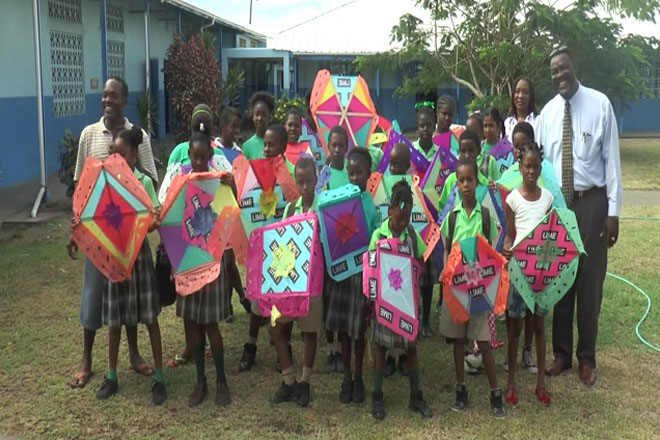 (ZIZ News) — Kite-flying is an annual Good Friday tradition and some students at the Tucker-Clark Primary School showed off their new hand-crafted kites this weekend after taking part in a kite-making workshop.

On Thursday, a ceremony was held at the school where LIME and Jeffers praised the children on their hard work and success.

“And when he approached us about it we were more than happy to partner with him; we have been doing this for some time now. And it’s a very good experience for the kids in particular to take part in making these kites because, like I said, it’s an art form that we really do need to keep alive. It’s part of our culture, it’s part of what makes us Kittitians and Nevisians,” he said.

Jeffers said he loves passing on the art form to the children and he will continue to teach them for as long as he can.

“For me it’s not about the money. It’s about the love of seeing a child making their own local kite and flying it. I could do like most people think, make a kite and sell a kite. The children don’t have to buy one from me. But that’s not my road. My road is to pass it on,” he said.

Jeffers also commended principal of Tucker-Clarke Primary, Sylvester Charles for his support of the kite-making workshop.