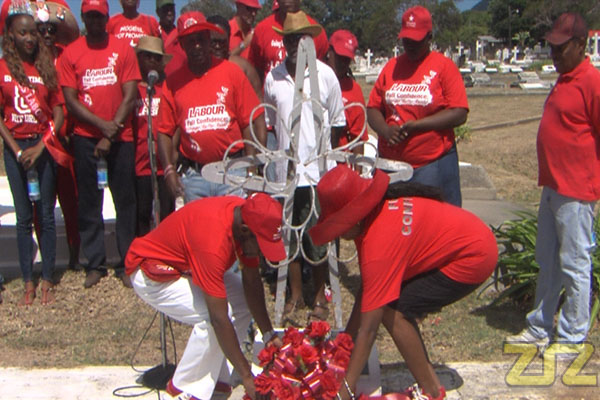 (ZIZ)– On Monday morning, members of the St. Kitts-Nevis Labour Party, supporters and well wishers went out in their numbers to pay respect and give tributes to the founding fathers of the nation and labour [party] stalwarts who have passed on.

The final resting places of the nation’s heroes were visited by both government and party officials who laid wreaths on their graves.

The first of the sites visited Monday morning was that of the Hon. Charles E. Mills, one of the Federation’s most visionary men in relation to the advancement of education for the people of St. Kitts and Nevis. It is also the first time that Mills is being recognized in this manner for his contribution to the nation.

“It is important for us to continue to recognize our leaders and our stalwarts because what Mr. Mills has done for this Federation is indeed very significant. Mr. Mills made it one of his duties, if not the most important of his duties, to ensure and to insist that every citizen should have access to secondary education and I would personally want to thank Mr. Mills and the family of Mr. Mills for the work which he has done because I can say that I have benefitted from such an education and indeed have moved on to tertiary level and university education as have many other persons in our Federation today.”

He said, “This is really the resting place for the Hon. Charles E. Mills, one who has been described by Dr. Wilson as a stalwart of the labour movement and it is for this reason that I want to commend the organizers for bringing this ceremony to the village of St. Paul’s and to the resting place of Charles E. Mills,” he said, adding that “Mr. Mills, as you would have heard, would have spent most of his time as an educator. He was also of course at one time apart from being a teacher, he was also the Chief Education Officer and it was while he was pursuing his studies for his Bachelor’s Degree in the United Kingdom that he came across what has now been shaped into the comprehensive education system that allow every single child, once one would have obtained the age of 11-12 years, to move automatically from the primary school education to a secondary school education. This to a large extent happened with the, I understand what would have been the thesis that was written by Mr. Mills when he was there pursuing his studies in England and then brought it to St. Kitts and Nevis, implemented it under the watchful ministerial eyes of non other than Clarence Fitzroy Bryant.”