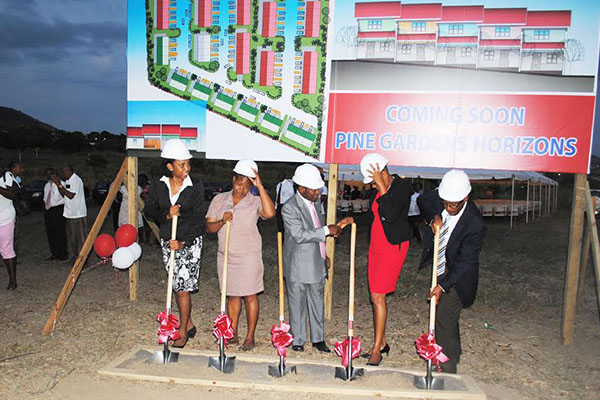 Basseterre, St. Kitts– Federal Minister of Health, Community and Social Development, Culture and Gender Affairs, and Acting Minister of Education, the Hon Ms Marcella Liburd, has said that the country has experienced meaningful social revolution only under Labour governments.

“I want to say something historically first, especially as we are coming out of the Labour Weekend where we recognised the part that the Labour Movement played in the total development of the country,” said Hon Liburd.

Hon Marcella Liburd who is also the Federal Parliamentary Representative for Central Basseterre (Constituency Number 2) made the comments on Tuesday afternoon May 6 at a groundbreaking ceremony held to launch Habitat Independence 30 Housing Programme at Pine Garden Horizons in her constituency.

According to Minister Liburd, when the Labour movement was formed 82 years ago, one of the struggles was for reform in housing, as in those days workers who were housed at the estates lived under the whims of the estate owners because when they lost their jobs they also lost their housing.

“Today what we have is a situation where over the past 18 years from 1995 until now, 4,000 houses have been built around this country,” said Hon Liburd. The function was also attended by Prime Minister the Rt Hon Dr Denzil Douglas, Minister with responsibility for Housing and Deputy Prime Minister the Hon Dr Earl Asim Martin, and the General Manager of National Housing Corporation Ms Judith Rawlins.

“No community, no constituency was left out – none. There was no discrimination, there was no tribalism; every single constituency and indeed community has been touched by housing from 1995 until now.”

In her estimation, the 4,000 houses cover not less than 16,000 persons who have been provided with shelter, and with a population of about 35,000 she pointed out that the present Labour Government has housed almost half the population of the island from 1995 until now.

“What we are saying now under Habitat 30 is that we are going to build another 1,000 houses, which would house approximately 4,000 persons,” said Hon Liburd. “So at the end of that, 20,000 persons will be housed out of a population of 35,000. That is a tremendous effort on the part of this government.”

Looking at the success of the Labour government, Ms Liburd said that empowering people in the area of shelter has been dynamic as it did not only include houses but also land. She said all the houses are built based on the latest building standards and trends.

“This was a project for SSMC workers who had no homes and who were provided with housing,” explained Ms Liburd. “Not all of the former sugar workers got houses as funds in that project got exhausted.

“I want those persons, who qualified for SSMC Housing and whose houses have not been built, to know that there is hope on the horizon. A proposal for funding is currently before Cabinet to complete that project and this has nothing to do with the 1,000 homes under the Habitat Independence 30 Housing Programme.”

She also talked of another housing project called Housing Solutions 500, in which Central Basseterre was supposed to get 52 houses, and announced that so far forty have been completed and the rest are nearing completion.

Those persons who cannot afford mortgages have been assisted through social housing for persons on social assistance and who are in really poor housing conditions.

“The truth is we have engaged in this before, because we have put down T-111 houses for elderly people and so on, free of cost in order to help with those who live in deplorable conditions who really do not have the means to help themselves, and we will continue to do that,” pointed out Hon Liburd.

Another way in which the current Labour Government has provided opportunities for housing is by distributing land to some of the people who can afford to building their own homes, or those who can afford to get loans from banks and all they require is a piece of land. The government will continue to distribute lands to persons in that category, she advised.

“In terms of the Village Freehold Land Act it was under this government that we thought that persons who had worked on the estates all these years in deplorable conditions and who got nothing that they should get their lands free of cost,” said Minister Liburd.

“Many people applied and got through with land under that Village Freehold Land Act because we are a caring government, and so we try to find ways and means of insuring that all of our people, regardless of where they are in terms of their situation of life that they would be provided with shelter for themselves and for their children.”

On the Labour Government’s latest housing programme, Habitat Independence 30, where 1,000 houses will be built, she said 62 units will be at Pine Garden Horizons which will include town houses and duplexes. She announced that it will be a very modern facility with infrastructure and roads and all that is necessary, good garbage situation and parking because nowadays everybody got vehicles.

“Ms Judith Rawlins (General Manager National Housing Corporation) told you how to go about applying,” advised Minister Liburd. “I want to advise those who are interested, many who have told me they are interested, please go and apply as soon as possible. Do not wait. Go and put in your application so that you can be called for an interview with respect for getting one of these units up here.”