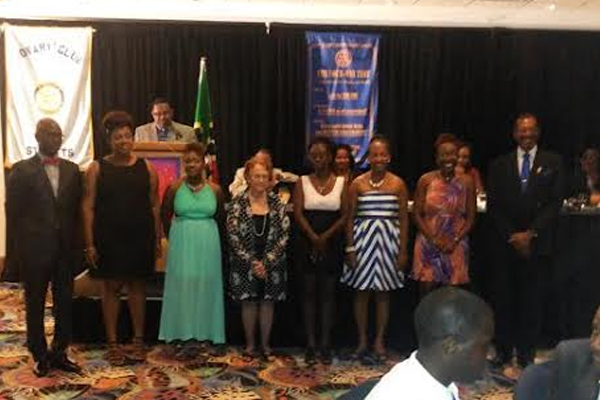 Basseterre, St. Kitts – A new group of leaders has taken the helm of The Rotary Club of Liamuiga (RCL). The new officers were installed at the RCL Annual Installation Banquet held Saturday July 5, 2014 in partnership with RCL’s sister club, the Rotary Club of St. Kitts, at the Marriott Ballroom. The evening’s theme was, ‘Light Up Rotary.’

RCL is part of a worldwide association of Rotary clubs whose mission is to provide service to others, promote high ethical standards among its own members and members of our society at large, and advance world understanding of goodwill and peace through its fellowship of business, professional, and community leaders. The work of RCL is coordinated by a board of dedicated officers who serve a one-year term.

The following Rotarians were installed as the new officers and board of directors for the 2014-2015 Rotary year:

Rotarians work together to create positive lasting change in our communities. True to that mission, incoming Rotary President Marcus Natta shared his vision for a year of ‘impact’ and promoting a positive ‘image’:

“IMAGE AND IMPACT: This is my personal theme for this Rotary year. My goal is to enhance the Rotary Club of Liamuiga’s IMAGE in our communities, our District and beyond to ensure the positive reverberations of our Club’s work are loud and are echoed with every activity or project for full IMPACT. Over the next few months, I will reach out to each of my fellow Rotarians to help me achieve this goal. I know that along the way I will make some mistakes as all new leaders do but despite any missteps our eyes must remain fixed on the goal of empowering our nation’s youth and enhancing our communities. Each Rotarian must take on a role as mentor and role model so that our work is matched by our own image,” said President Natta.

In addition to the board of directors, committee chairs were also installed. The following Rotarians were elected and will coordinate the RCL’s important work on the ground:

In addition to the official installation of officers, the evening’s programme also featured an address from RCL Past President Peter Jenkins. PP Jenkins offered comments on behalf of outgoing RCL President Archdeacon Valentine Hodge who, unfortunately, was unable to attend. Awards were also presented to Ms. Kerry Tuckett as ‘Nurse of the Year’ and Constables Danny Isles and Kyle Dunrod as ‘Police Officers of the Year’. These awardees distinguished themselves in the call of duty and earned the admiration of their colleagues and the appreciation of the people they served. The RCL ‘Rotarian of the Year Award’ was presented to Ms. Carol Phillips who demonstrated a high level of industry, dedication and commitment in performing her Rotarian duties.

The evening’s ambience was enhanced by soothing sounds of trumpeter Enote Inanga who provided a splendid musical selection. Rotarian Neil Owen of the Rotary Club of St. Kitts served as Master of Ceremonies providing smooth transitions throughout the program. Attendees were also treated to a moment a humour during the ‘Lighter Side of Rotary’ led by Sargeant-At-Arms Charles Wilkin QC of the Rotary Club of St. Kitts. Sarge Wilkin quizzed the audience on the FIFA world ranking of the St. Kitts and Nevis men’s football team and threatened to fine members for the incorrect answer. The evening drew to a close with thanks and acknowledgements given by President-elect Tuffida Stewart.

The Rotary Club of Liamuiga thanks all sponsors and participants of its events during the last Rotary year. Membership in RCL is open to any St. Kitts-Nevis resident. Meetings are held each Wednesday between 7:30 a.m. and 8:50 a.m. at the Royal St. Kitts Golf Club House.

For more information on how you can become a member or sponsor of the Rotary Club of Liamuiga please visit us online at http://www.rotaryliamuiga.org/ or facebook.com/rotaryliamuiga or contact us via email sent to liamuiga.rotaryclub@gmail.com.