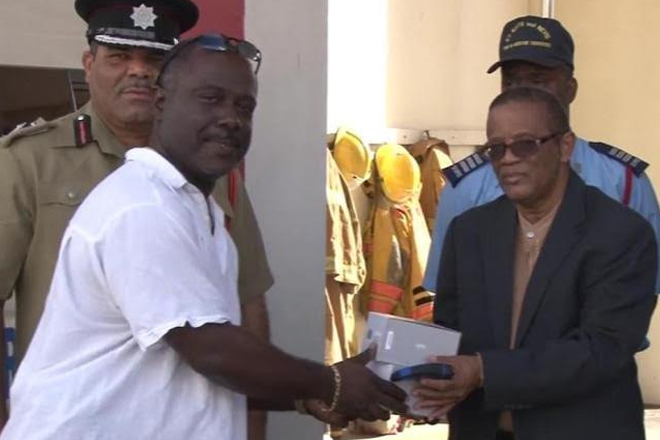 (ZIZ News) – The St. Kitts and Nevis Fire and Rescue Services Department will now be able to detect hotspots, thanks to a donation of thermal equipment by the Owner and Director of St. Kitts Marine Works, Regiwell Francis.

Francis said his decision to donate the equipment stemmed from an experience he had with the Fire Department.

“We have had a case where we called them one time and they had to be recalled because the fire reignited and what I realised is that they had no way of really checking, or they didn’t have the equipment for testing to see the hotspots. So I took it upon myself to put some money aside every few weeks of every month until I was able to acquire three thermal image cameras,” he said.

He outlined what the equipment is to be used for, stating that heat signatures can be seen even in buildings.

He further stated “If you have to be searching for someone who might be lost in the bush, you can use this. It will penetrate through the bush and the heat signature will come out visible in this unit. Same with the hotspots; when you out something in a pile of bush, you can look through the pile and see if it is lit underneath or not and that what this unit is really for.”

“What we are witnessing this morning is a true demonstration of what a good corporate citizen is in the Federation of St. Kitts and Nevis and Mr. Regiwell Francis is demonstrating that to us,” adding “The equipment that he is actually donating places us at the top of the line as it pertains to major rescue operations. So I just want to say to Mr. Regiwell Francis how deeply appreciative we are to you for this invaluable donation that you have made…”

Mr. O’Garro further pledged that the equipment will be used to enhance the effectiveness and efficiency of the service provided by the St. Kitts and Nevis Fire and Rescue Services to the general public.

Earlier this week, Francis donated thermal equipment to the Fire and Rescue Services Department on Nevis. He has also requested that one be kept at the Sandy Point Fire Station.