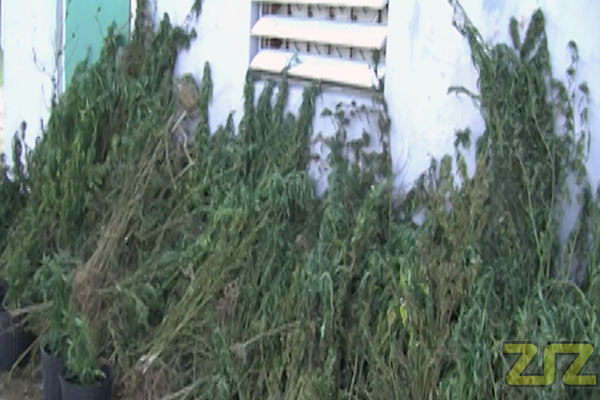 (ZIZ)– In conducting routine security patrols on Saturday, the St. Kitts-Nevis Defence Force came across five patches of marijuana plants in the mountain of Keys Village.

Public Affairs Officer for the St. Kitts-Nevis Defence Force Captain Kayode Sutton gave ZIZ an overview of what was found, stating that a total of 6000 plants, which averaged six feet tall, were seized.

“There were a lot of seedlings as well between one and three which were destroyed. Also we saw their cultivation apparatus – things like water cans and drums for water catchment and also some of the things that they used to cultivate the ground– all these were found in the area,” Sutton explained.

Captain Sutton added that while some of the marijuana plants were in the ground, some were also planted in pots; perhaps for easy transportation should there be a threat of detection by the armed forces.

He said however, that the Defence Force has the equipment necessary for early detection and criminals will be found.

“A message to the marijuana planters and the criminals: the Defence Force is on their trail, they cannot hide. Say it with all confidence that they cannot even run. We always catch up to them. As we speak, there are other operations going on in other parts of the country right now and I am sure it is going to be fruitful as well because we know the areas to target. We have our equipment out there that indicate to us the areas so we have early detection for this illegal illicit drug cultivation in the federation,” he stated.

Captain Sutton said that although no one had been arrested in connection with the marijuana plants, it is not a deterrent as the positive outcome is that the drugs will not get back on the streets of St. Kitts and Nevis.