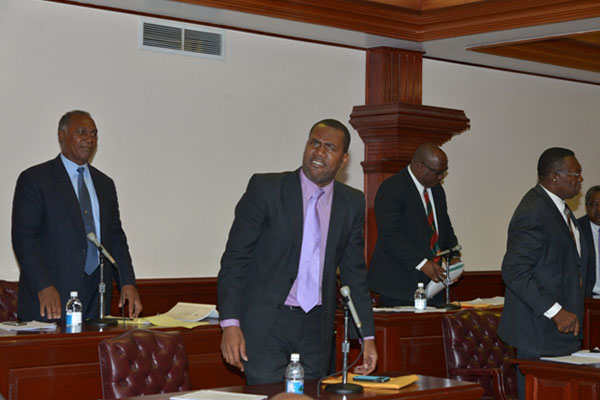 Media reports on the unruly, bickering and pandemonium behaviour of the PLP, PAM members in the National Assembly

Basseterre, St. Kitts (CUOPM) — Monday’s lack of decorum and unruly behaviour by the Unity members on the opposition benches of the St. Kitts and Nevis National Assembly is getting the attention of the local media.

The St. Kitts-Nevis Observer reported that as a result of the misbehaviour of the People’s Action Movement (PAM) and the People’s Labour Party (PLP), members, the Speaker of the National Assembly, the Hon. Curtis Martin threatened to boot several Opposition MPs out of the House for disrupting the session.

The St. Kitts-Nevis Observer said it was pandemonium almost from commencement.

“Constant interruptions, bickering and thinly veiled threats during Ministers’ statements led to Hon. Martin threatening to remove MPs and suspend parliament. He repeatedly cautioned several of the opposition members, instructing them to “Shut up!” and “have respect,” the St. Kitts-Nevis Observer reported.

It added: “The Speaker accused them of not abiding by the rules of the House that speak to members’ decorum and behaviour. He said while he had no control over their behaviour, there were options available to him to maintain order on the floor.”

It noted that the Opposition MPs became especially vocal during Education Minister, Sen. the Hon. Nigel Carty’s statement on a new education policy, calling on him to tell the public the position with the beleaguered Basseterre High School (BHS).

WINNFM in its report described the opening session of Monday’s House of Assembly as “a morning of drama and flashpoints mainly between Speaker and opposition.”

It reported that as a result of the behaviour of the opposition members, Speaker Curtis Martin threatened to adjourn the sitting, adding that he was likely to ask some opposition MPs to leave the House before moving to adjourn.

“The opposition MPs were also asking for a count of the votes during the first reading of various bills, in what appeared to be a deliberate effort to keep the Speaker on his toes and challenge the authority of the governing Labour Party. The opposition MPs eventually walked out of the House,” WINNFM reported.

“Opposition MPs themselves were not on their best behaviour, as they interrupted government MPs on the floor with off the cuff remarks, while some government MPs did the same,” WINNFM said.

In its report, SKNVIBES.com reported that the Federal Parliament was reduced to what has been described as “a den of brawlers” with the Speaker appearing to struggle in his attempt to maintain order and decorum in the House.

The session – the first to be held in six months – commenced mid-morning with most of the Government and Opposition Members present.

Following the prayer, the Speaker – the Honourable Curtis Martin – said the order and decorum of the house must be observed and respected and in that regard, all – including members of the gallery – should ensure that their cell phones do not disrupt the proceedings and that there should be no outbursts, disturbance or interference of the proceedings.

“Opposition Member the Hon. Shawn Richards was the first on his feet expressing his views that the decorum of the House has already been disrupted with notice of that sitting not being given to the Members of Parliament (MPs) in the specified amount of time. The Speaker’s ruling that that session was convened as an emergency sitting and that the matter is closed did not sit well with the MP Richards and cross-talking ensued, during which the issue of the lingering Motion of No Confidence (MoNC) was raised by Richards.The Speaker advised MP Richards to “tell the whole story” and indicated that that matter is “before the court,” SKNVIBES reported.

One lister on the skn@yahoogroups.com noted that given the way the Unity construction team conducted themselves in the Parliament, Speaker Curtis Martin must be commended for passing their (construction team) test of his rock solid patience

“Obviously, grown men went to the Parliament and persistently, and willfully disregarded the authority of the Speaker. They were indeed, insolent to the Speaker and imputing motives (Suggesting the Speaker was biased). Grown men pretended to not know the rules of the Parliament, and persistently and willfully refused to confirm to a standing order. It was the most disorderly conduct of the people’s business, and none in the construction team will be made to suffer the consequences,” wrote Carleen Pemberton.

“I want to commend the Speaker for his focused vision on ensuring the business of this house was pursued. For almost 2 hours you have been the subject of serious test with regard to your patience and ability to take insults with a smile, having been humiliated by Members opposite, who clearly came to the House today to be disruptive and prevent the business of the people in this house,” he said.

Dr. Douglas applauded Martin’s ability to “bring the House back in order when it appeared it had gone out of order.”

He said the Speaker had been “determined to ensure the people’s business would be carried through irrespective of the childish behaviour of the Opposition.”