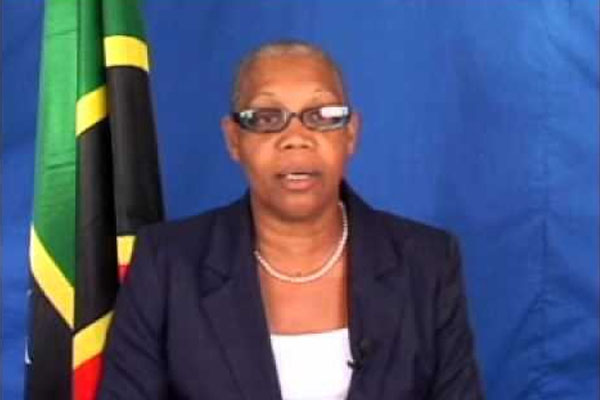 Minister Liburd: We are Seeing the Dawn of a New St. Kitts-Nevis

(ZIZ News) — One of the nation’s senior government officials is of the view that St. Kitts-Nevis is a step ahead of its counterparts in the sub-region and the region as a whole in several areas.

The Hon. Marcella Liburd, Minister of Community Development, spoke during Thursday morning’s opening ceremony of the 2014 National Consultation on the Economy.

As Minister Liburd listed some the nation’s most recent accomplishments, she said “this is the dawning of a new St. Kitts and Nevis.”

“So where are we? First in foreign direct invest in the Caribbean, highest per capita income in the Caribbean; first in manufactured exports in the OECS including Barbados; first country in the OECS to produce a solar energy factory and we are exporting to other countries; first in the Caribbean to introduce the baler system in Solid Waste Management as the first step towards waste to energy; highest growth in the Caribbean 3.8 percent. In fact, higher than the USA at 1.9 percent and the European Union which showed negative growth,” she stated.

As Minister Liburd shifted her focus to tourism, in the absence of Tourism Minister the Hon. Richard Skerritt, she referred to an article printed in the ‘Business Insider’ which ranked the Federation 14th among the top 50 worldwide destinations to watch, based on data from the World Travel and Tourism Council.

She said that was just one of several accomplishments in the field of tourism.

In addition to lauding the top tourism officials for their dedication to the industry, Minister Liburd spent some time reflecting on the strides made in financial services. She said “the federation is punching way above its weight.”

“A successful debt strategy and debt management has seen a reduction in our debt to GDP ratio from 190 percent to the current level of about 95 percent and projections of it trending even lower to about 80 percent by the end of this year. St. Kitts and Nevis are ahead of the CARICOM average in CXC results in English and Mathematics. Our Citizenship by Investment Programme is the envy of the world. Our New Horizon Centre is a model in the OECS for rehabilitation of at risk youth,” she outlined.

Sport development was also among the list of achievements outlined by Minister Liburd.