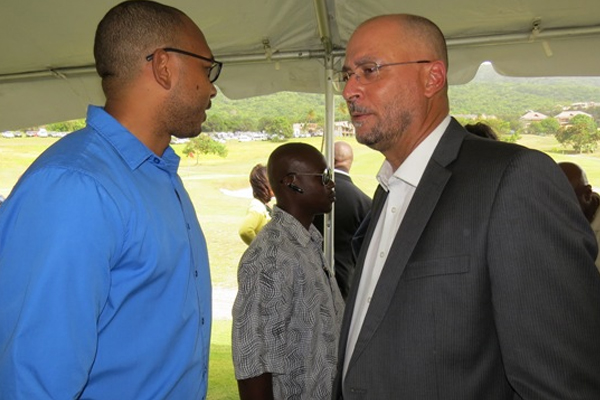 Speaking at the soft opening of Kittitian Hill, Minister Skerritt said the success of the project is as a result of the strong and unwavering support from the Government from its very inception.

“And that was because we knew that the economic activity generated here, would positively impact the lives of real people, and give hope to those in this area who had experienced despair after sugar,” said Minister Skerritt.

“That is why we continued to give support, even in the midst of a vicious anti-Kittitian Hill campaign by opposition politicians during the challenging months leading up to the 2010 general election,” said Mr. Skerritt in the presence of the lone opposition politician, Jonel Powell, who was among scores of invited guests and government and private sector officials.

“In a similar light, today should also be a celebration for the visionary Sugar Industry Diversification Foundation (SIDF) as represented so ably by the Chairman this afternoon, whose timely equity investment in Kittitian Hill has received ongoing criticism from the myopic leader (Hon. Dr. Timothy Harris) of the opposition arrangement known as Unity,” said Minister Skerritt, who is also the Minister of International Trade, Industry and Consumer Affairs.

Last Friday, Dr. Harris continued his severe criticism of the SIDF at a meeting at their headquarters, when scores of young people from his constituency are employed at Kittitian Hill.

Minister Skerritt said the construction of US$300 million Kittitian Hill in the northwestern area of St. Kitts has had significant economic impact on the twin-island federation.

He said the project has provided jobs to more than 500 local construction workers and has paid some 75 local contractors and suppliers more than 81 million EC Dollars.

Kittitian Hill is in the process of recruiting the 300 staff needed by December when it is fully operational.

Budget Address To Outline Support For The Ministry Of Entertainment, Entrepreneurship…

Federation Of St. Kitts And Nevis Will Access The COVID-19 Vaccine Through The COVAX…