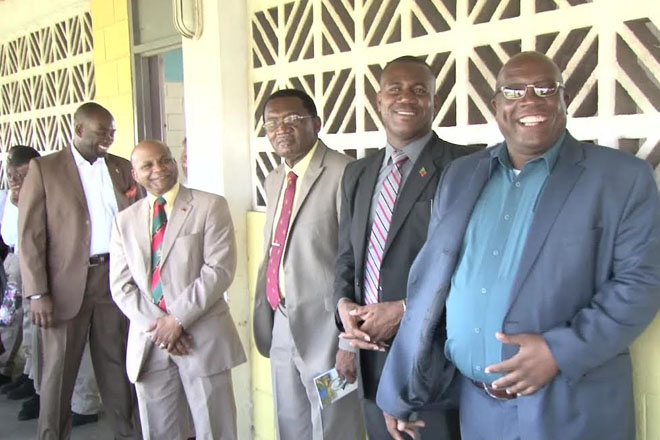 (ZIZ News) – Prime Minister, Hon. Dr. Timothy Harris, along with other government ministers made stops at primary and secondary schools across St. Kitts, on Monday, as part of the Independence 32 celebrations.

ZIZ News was on hand at several of the stops, where the officials were warmly welcomed by school faculty and students.

Area Representative for East Basseterre, the Hon. Ian “Patches” Liburd said the visits were designed to show appreciation to the Federation’s students.

“We are here because you are important to us as a government as we embark on our 32nd birthday as an independent nation,” the Minister stated, adding that “Our theme this year, United in Building a Stronger Nation, is very instructive to all of us and in particular all the youths and of course, their teachers. We believe that the youths are the future leaders in this country and as such, we have come here to pay respects and to remind you as we all must reflect on where we came from and the things we have achieved thus far as a nation.”

During a stop at the Immaculate Conception Catholic School, Deputy Prime Minister and Minister of Education, the Hon. Shawn Richards spoke of his ministry’s willingness to forge partnerships with the different educational stakeholders.

He said, “The Ministry of Education stands committed to working with all children and all institutions here in St. Kitts and Nevis. We recognise that indeed this is a private school but it is a private school which has partnered with the government; which has partnered with the people of St. Kitts and Nevis to provide an education for our children and I dare say a quality education. To you the students at ICCS, we say a happy Independence to all of you.”

“I want to hope that this year will be another wonderful year in the life of the Washington Archibald High School and you can rest assured that this school will always have the fullest support of the Government and people of St. Kitts and Nevis. So again, I say thank you for choosing this school, thank you for being part of this school and Happy Independence 2015,” the Prime Minister said.

Monday’s activity was the first of two visits planned for this week on the Independence 32 calendar of activities. The second visit to schools is planned for Thursday September 17th.