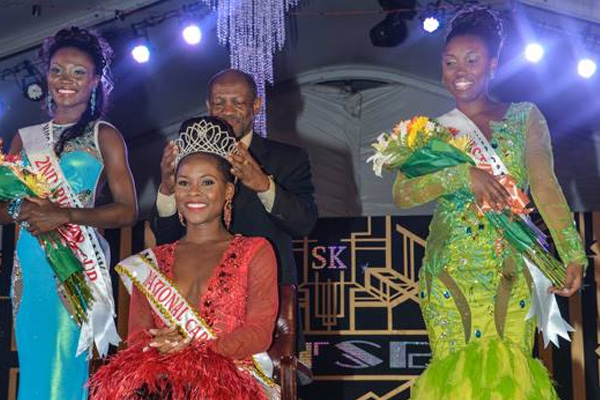 Basseterre, St. Kitts — The National Carnival Committee (NCC) is extending best wishes to its National Carnival Queen 2013/2014, Kaeve Armstrong and first runner up, Yarayni Morton, who will be representing St. Kitts and Nevis and St. Kitts respectively in the upcoming summer regional pageants.

The National Carnival Committee recognizes the extraordinary performances delivered by both young ladies when they competed in the National Carnival Queen Pageant 2013/2014 and are expecting even better performances as they move on to represent their country. Kaeve departed the island on Monday 30th June 2014 for St. Vincent and the Grenadines to compete with nine other Caribbean beauties in her first of two regional pageants, Miss Carival 2014 pageant. The pageant, which is organized by the Carnival Development Corporation of St. Vincent and the Grenadines is the 29th staging of the event and will be held on Friday July 4th 2014 at 8 pm at Victoria Park under the theme “29 Years of Exquisite Pageantry”.

The reigning National Carnival Queen will also be competing in the 53rd Annual Jaycees Caribbean Queen Show in Antigua on Friday August 1st 2014. This pageant, produced by JCI Antigua will feature thirteen countries under the theme “Empowering Women Through Pageantry”. It celebrates the national queens of the region together on one stage to express the rich culture and heritage of their homeland as well as their individuality in talent, gown, public speaking, physical fitness and poise.

Twenty-three year old Yarayni Morton, is one of twelve beauty queens in the 9th Miss Caribbean Culture Queen 2014 scheduled for August 4th 2014 on the sister isle of Nevis. As Miss St. Kitts, she will compete in five segments with hopes of becoming a regional ambassador for cultural arts in the Caribbean.

The National Carnival Committee is proud to have both Kaeve and Yarayni representing us and we take this opportunity to say continue working hard and good luck as they prepare to compete for these prestigious regional titles.