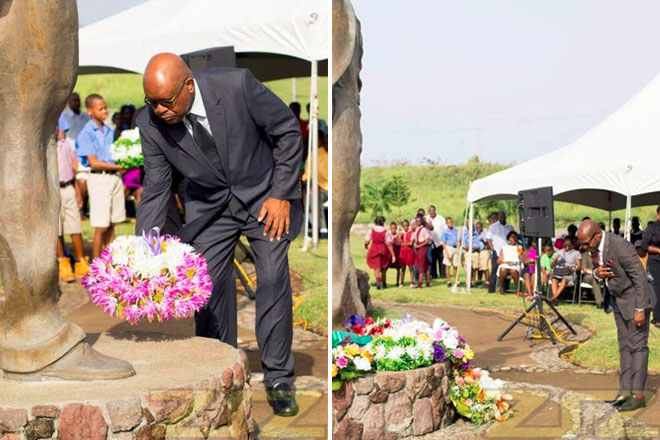 Government ministers, members of the Opposition, the Diplomatic Corps, and primary and secondary schools students were among those in attendance.

Observances were made for the arrival of the Governor General, S.W. Tapley Seaton CVO, QC, JP and the Prime Minister, Hon. Dr. Timothy Harris.

The invocation was delivered by Reverend Damien Hughes of the Methodist Church.

Following that, Prime Minister Harris gave remarks and in that, announced that the newest National Hero will be made public shortly.

Additionally, the Prime Minster said there is a plan to convert Bradshaw’s home into a museum as well as finding a suitable location for a National Park in which all National Heroes will be hosted with plaques and busts.

He stressed that it is the right thing to honour National Heroes.

The laying of wreaths began with the Governor General, and was followed by the Prime Minister then the Commander of the St. Kitts-Nevis Defence Force, the Acting Commissioner of Police and Ambassadors from the Republics of Cuba, Venezuela, Brazil and Taiwan.