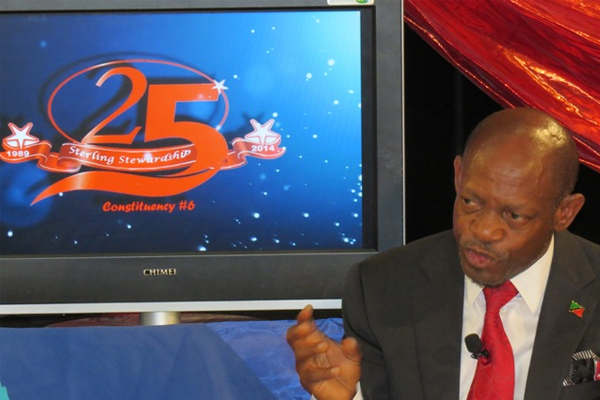 Basseterre, St. Kitts (CUOPM) — A former senior economist at the United Nations in New York said Tuesday that the Federation’s Prime Minister the Right Hon. Dr. Denzil L. Douglas has helped to propel St. Kitts and Nevis to an unprecedented level of development surpassed by few countries in the entire Caribbean region and he must be commended.

“He is well respected regionally and internationally among leaders of the world including, former President Bill Clinton of the United States of America and former Prime Minister Tony Blair of the United Kingdom,” said St. Kitts-born Mrs. Willa Liburd.

Mrs. Liburd, commenting on the two-hour Special Edition “Ask the Prime Minister,” to celebrate the Prime Minister’s 25 years as the Parliamentary Representative for St. Christopher Six (Newton Ground to Harris) wrote on the social medium sknyahoogroup.com: “Running a country cannot be an easy task, having to juggle and satisfy often widely diverse and competing needs, wants and demands amidst strong opposition from many quarters, and these gentlemen know that very well.”

She was at the time extending sincere and heartiest congratulations to Prime Minister Douglas for attaining the significant milestone of 25 years as a parliamentarian of St. Kitts and Nevis, and soon to be twenty years as Prime Minister of the Federation.

“I listened to the Prime Minister today as he gave his very moving personal story on a special live radio programme of “ASK the Prime Minister” carried by ZIZ; his humble beginnings, the loss of his mother at an early age, but the love of his family that gave him succour over many years. But I’ve also seen him in action over the years. I believe that during that period he has provided very strong leadership of the country, helped to create a stable environment and promote an economic vibrancy to enable each and everyone to play a role in the development of themselves and the country,” she said.

Mrs. Liburd admitted that Dr. Douglas is human and not without fault, “and it can be said that he has done or presided over some rather unorthodox things, which I believe would have been better left undone and from which I respectfully hope that he would draw some important lessons.”

She was of the view however that Dr. Douglas has several more years of productive service to offer the country in whatever capacity presents itself.

She added that “Dr. Douglas is not only a highly intelligent and politically savvy and astute politician, but he is energetic, charismatic, and yet down to earth and can relate very well with ordinary people.”

“And he gets things done. I believe he truly loves the people of St. Kitts and Nevis and we wish him well and good health and strength and pray for God’s continued guidance and protection as he continues his work in the good service of the country,” said Mrs. Liburd.