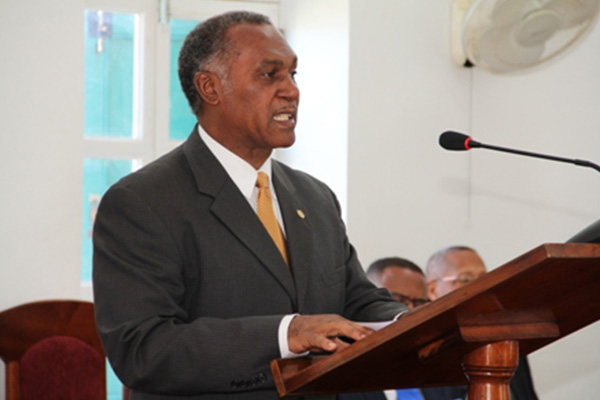 NIA Charlestown Nevis —Premier of Nevis and Minister of Finance Hon. Vance Amory presented a $171.02 million budget for the Nevis Island Administration (NIA) with no new taxeswhen he delivered the 2014 Budget Address, at a sitting of the Nevis Island Assembly on December 18, 2013, with the theme, “Facilitating Macro-economic Stability, inclusive Growth and Employment.”

Mr. Amory,who presented the Budget in two hours and 50 minutes, noted that Personal Emoluments would take up the lion’s share of the Administration’s planned expenditure for 2014.

“The NIA intends to spend $171.02 million in 2014;$126.85 million will be on current expenditure and $44.17million on capital investment.  This calculates to an allocated ratio between current and capital expenditure of approximately 74 to 26 percent respectively.

The Minister of Finance also indicated that the use of the public purse would see policies implemented, that would bring benefits to the people of Nevis.

“The Administration will embrace new initiatives to invigorate the expansion in our economic sectors and the provision of services in health, education and social development.

“These initiatives will be fuelled by resources in total revenue and grants of $140.04 million; an increase of 6.64 percent over the budget for 2013.  Grant revenue which includes development aid and budget support will amount to EC$14.24 million. Additionally, loans of $21.92 million will be sourced to assist in the financing of needed capital investments,” he said.

“The Customs and Inland Revenue Departments are expected to collect $39.09 million and $54.39 million respectively. Meanwhile, revenue collected from the Financial Services Department is set to increase to $13.56 million, due to anticipated growth in international insurance and registered offshore entities and a small increase in fees.

“The Premier’s Ministry is expected to collect $8.98 million, of which the Supply Office projection is $7 million.  The Water Department on the other hand is projected to collect $6.27 million,” the Finance Minister noted.

Mr. Amory disclosed that his Cabinet continued to focus on proactive fiscal policies which would generate stable revenue inflow and not restrict the growth of the private sector nor inhibit foreign investment.

“The ambit of our policies will facilitate inclusive growth as the most potent tool to generate employment and a positive future for our people.

“Subsequently, private sector expansion will be supported through targeted tax incentives in sectors such as tourism and agriculture and the spending priorities will harness improvements in public infrastructure, social protection and overall operational efficiency, to obtain the best value for our tax payers and our people generally,” he said.