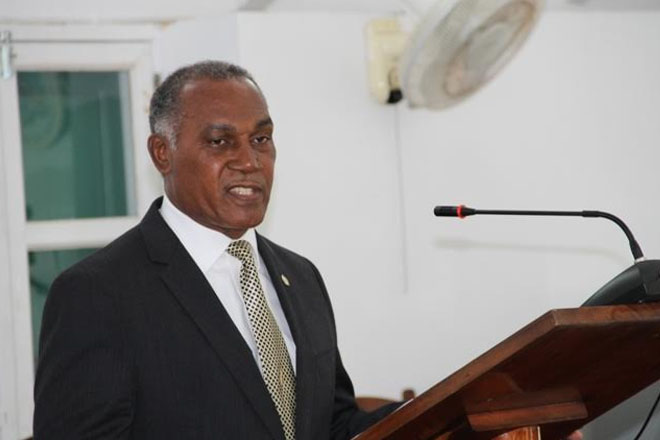 According to Amory, who also serves as that island’s Finance Minister, his team has increased revenues by five percent, partnered with the Federal Government to remove Value Added Tax [VAT] from food, medicine and funeral expenses and started the expansion of the veterinary clinic.

In the area of public infrastructure, Premier Amory said they have substantially completed two phases of the Water Enhancement Project among other things.

“The Hanley’s Road Project, we completed phase one of that project. We completed the extension of the cruise pier in Charlestown in preparation for the tourism season to facilitate the on loading and offloading of our visitors,” he said.

Accomplishments in the area of education and training, he said, include refurbishing all school plants in preparation for the 2015 school year.

“We have also partnered with a private entity to procure two brand new school buses to service our children’s transport to the schools. We have also refurbished all school plants in preparation for the 2015 school year at a cost of $2.4 million and we have commenced construction of a new hot meals school kitchen at the Joycelyn Liburd Primary School to be commissioned in the new year,” he explained.

He continued, “We have also completed substantial work on the rehabilitation of the Department of Education Building at Marion Heights and to support our agricultural thrust for greater food security, we have secured full scholarships for three of our students to study agriculture at Earth University in Costa Rica.”

He also noted that they had facilitated training in QuickBooks accounting for micro organisations.

Meantime, some of the other accomplishments are expected to directly affect the tourism sector.

“We’ve seen the restoration of the New River Estate Mill and its environs,” Premier Amory said, adding that they have also installed a second X-Ray baggage machine at the Customs Department.

Amory also spoke of the completion of debt restructuring with the Kuwait Fund, the placement of Nevisians at the forefront of the Ministry of Foreign Affairs and in ambassadorial and diplomatic positions globally, and a partnership with private entities that led to the procurement of two garbage trucks and the completion of regulations to support offshore banking ordinance.