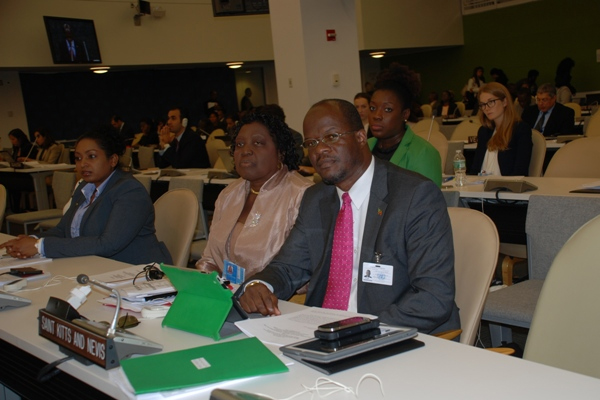 Basseterre, St. Kitts (CUOPM) – St. Kitts and Nevis’ Minister of Foreign Affairs, the Hon. Patrice Nisbett is of the view that it is imperative to review the existing foreign policy considering the evolution of global affairs, geopolitics and how the national agenda can be pursued within the evolving environment.

The Federal Cabinet has approved the revised foreign policy of the twin-island Federation presented by the Nevisian-born Minister of Foreign Affairs, who advised that a foreign policy ought to be dynamic since world events define and shape international relations on an ongoing basis.

Minister of Information, Sen. the Hon. Nigel Carty disclosed that the revised foreign policy outlines the principles and priorities of the Federation that will guide the interactions of government officials with foreign governments and regional and international entities.

“The ten (10) Foreign Policy principles established are: Sustainable economic growth for all, Human and Social Advancement, Respect for the environment, Non-intervention, Peaceful settlement of conflicts, Right to self-determination, International peace and security, the Promotion of human rights. Democracy and good governance, and Respect for the rule of law,” Mr. Carty said in a Post Cabinet Briefing.

He disclosed that sixteen (16) specific foreign policy objectives have been identified.

“They include promotion of trade, investment and tourism through bilateral, regional and multilateral cooperation; promotion and facilitation of investment in the Citizenship by Investment Programme; strengthening relations with traditional partners and non-state actors; taking full advantage of our membership in regional and international bodies including the UN and its organs, the OAS, the Commonwealth, CELAC, OECS, and CARICOM and ACS, while fulfilling our role as an active and contributing member and creating and maintaining strong networks with the Diaspora through our overseas missions,” said Mr. Carty.

He said other objectives include building strategic partnerships for cultural cooperation, addressing current global issues of concern to the Federation including human rights, climate change, vulnerability of small states to natural disasters and the mobilisation of concessionary and grant funding, among other things,” Mr. Carty said.

He disclosed that the foreign policy document also lays out specific strategies for the Federation’s relations with Africa, North America, Latin America, the European Union and its members’ states, the Asia Pacific region, Russia and Eastern Europe, and the Middle East.

“The Hon. Patrice Nisbett, Minister of Foreign Affairs, intimated that St. Kitts and Nevis faces challenges for which local action alone will not suffice. He advised that no state acting alone can protect itself from the internal and external vulnerabilities, and the purpose of foreign policy is to build relationships in pursuit of our national interest,” said Minister Carty.