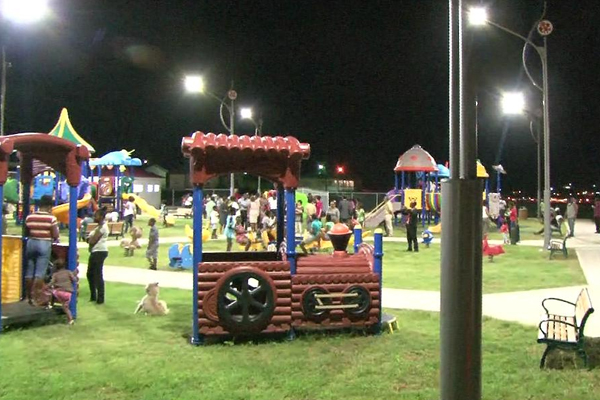 Basseterre, St. Kitts, December 18, 2014 (SKNIS) — The opening of the New Road Family Park is part of the Social Development message of “Stronger Families – Safer Communities,” and is part of the renovation of other parks around the island.

This is according to Minister of Health, Social Services, Community Development, Culture and Gender Affairs Honourable Marcella Liburd, who revealed that to her knowledge the park is the first of its kind in the sub-region and so should be treasured.

“First of all it promotes family,” Minister Liburd emphasized. “This park will encourage inter-generational bonding. You can have grandmothers, great-grandmothers and grandfathers coming to the park. We have benches for them to sit on, while they look at the grandchildren and great-grandchildren playing. We can have fathers and mothers and young people coming with the children because we have the outdoor gym and we also have the paths for them to jog, walk or take a stroll with a pram.”

The Minister responsible for Community Development also saw the park as a promoter of education with its various colours and shapes, a promoter of health because of its play equipment and its walkways and outdoor gym equipment for adults and as a calming and beautiful environment with a view of Port Zante Harbour and docking cruise ships and aircraft at the Robert L. Bradshaw International Airport. Benches for the elderly and the ongoing partnership with the Republic of China (Taiwan) were also seen as gains.

Minister Liburd revealed that the New Road Family Park will be opened to the general public for the first time on Monday, December 22. She explained that this was because Park Wardens were being trained up until the end of this week. The importance of children being accompanied by adults was also emphasized.

“The Park Wardens are here to ensure that there are no mishaps; to make sure that the place is clean,” Minister Liburd stressed. “We have bins around to make sure that you don’t litter, put your garbage in the bins. They [park wardens] are not here to oversea your children. So I just want to let parents and other adults know, that you must be there to take care of your children and oversea them.”

Minister Liburd also thanked all who were involved in making the concept of the park a reality, singling out the Taiwanese Government, as well as Project Manager Peter Jenkins and Technical Expert Calvin Esdaille who both volunteered their time. Members of the community who also volunteered to do maintenance and landscaping were also identified.

Ambassador of the Republic of China (Taiwan) His Excellency Miguel Tsao commended all who were involved in the construction of the park, making special mention of Taiwan Tai-Shin Recreational Facility which produced the equipment and whose owner and seven skilled technicians, came to St. Kitts to set up the equipment. He also thanked the local task force.

“We can probably label this cooperative project as a shining example of the fruitage of our joint effort,” Ambassador Tsao noted. “It is the direct result of discipline and hard work. Indeed the completion of the Family Park is one of the best seasonal harvests in 2014.

Opening hours for the park are 10 a.m. to 8 p.m. daily. Minister Liburd revealed that ongoing work on the park will include the construction of a parking lot on the lower level of land, the identification of locations for small businesses and a covered shelter for the southern side of the park. It was also noted that an administrative structure would be put in place to coordinate organized visits by groups of children.