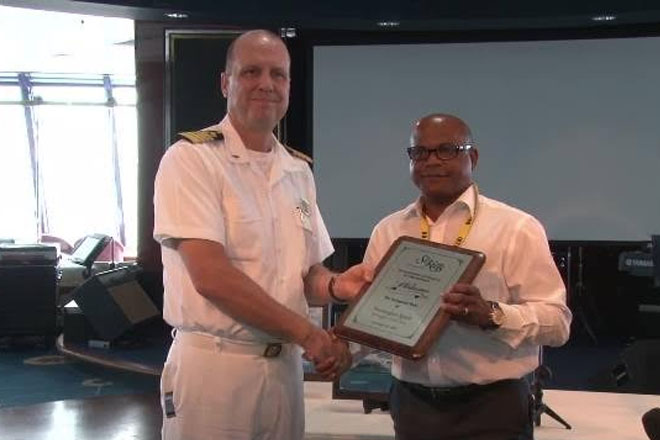 (ZIZ News) – One week after Port Zante welcomed the Norwegian Getaway, for the first time, a second ship from the Norwegian Cruise Line made its inaugural call.

A delegation comprised of Minister of Tourism, the Hon. Lindsay Grant; Port Manager Donald Cable, SCASPA’s Seaports Manager Louie Hendrickson and Operations Manager for the St. Kitts Tourism Authority Melnecia Marshall were treated to a grand tour of the vessel.

During a plaque exchange ceremony, Minister Grant officially welcomed the vessel, noting that November is off to a great start in terms of Tourism.

“November I believe is a wonderful month, not only for the Norwegian Cruise Line but I think for the Tourism Authority in St. Kitts and Nevis,” the Minister said noting that “We welcomed last week, I think it was on Sunday 8th, Norwegian Getaway to St. Kitts for the very first time and now we are here today welcoming the Norwegian Spirit.”

He also used the opportunity to lobby for the cruise line’s newest ship, the Norwegian Escape, to visit Port Zante.

“I know you will enjoy our beautiful island and as we said to the Getaway last week, we hope that you have many more visits. I would also wish to say to you that we hope that very shortly you will bring the Norwegian Escape, which was launched on Sunday 8th, to our shores. And I am here to tell you that we are here to welcome you, not only that to cooperate with you and to say to you that we are in a very dynamic industry; we are having one million passenger this cruise year,” Grant said.

Captain Peter Engwall thanked the local delegation for the warm welcome and said he hopes to be back in St. Kitts on a regular basis.

He said, “It’s a onetime stop for us here during our re-positioning cruise from Europe over to Port Canaveral but if God’s will and if the company decides so, I hope we can come here many, many times and if not with this ship with any of the other ships.”