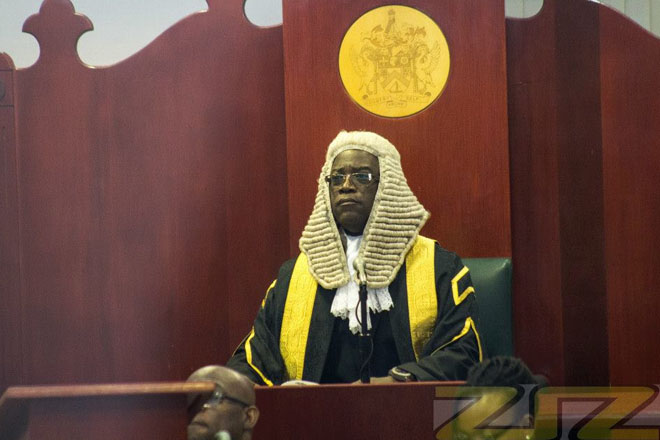 Opening of National Assembly; Speaker Brand Pledges to be a Model of Good Governance

(ZIZ News) — History was made in St. Kitts and Nevis when the country witnessed the opening of the National Assembly under the Team Unity-led government.

The event began with a Guard of Honour, made up of members of the St. Kitts and Nevis Defence Force and the Royal St. Christopher and Nevis Police Force.

One by one, the Ministers of Government arrived and made their way into the Assembly Chambers to the cheers of the large crowd.

The session consisted of the election of various parliamentary officials and presentation of the Throne Speech.

The Hon. Franklin Brand and Senator the Hon. A. Michael Perkins were elected Speaker and Deputy Speaker of the House.

Mr. Brand said he intends to be a model of good governance. He pledged to carry out his responsibilities with dignity.

“Let me assure you that I intend to discharge the duties of this high office with the zeal and dignity it deserves. I will always keep your concerns foremost in my mind while presiding over your honourable house,” he noted.

The ceremony also included the administering of oaths to Members of Parliament and the delivery of the Throne Speech by the Governor General’s Deputy, Tapley Seaton Q.C.

Prime Minister, the Hon. Dr. Timothy Harris said his government is committed to working for the people and retaining their trust.

He said, “This is a government that was elected by the people. And we want to ensure that through our tenure that both in Government and in this Parliament, we conduct ourselves in a manner that continues to hold the confidence of all of the people of St. Kitts and Nevis.”

Special seating was set up throughout Government Headquarters to accommodate those who could not be seated in the National Assembly Chambers and large screens were installed on Church Street to broadcast the event to those outside.