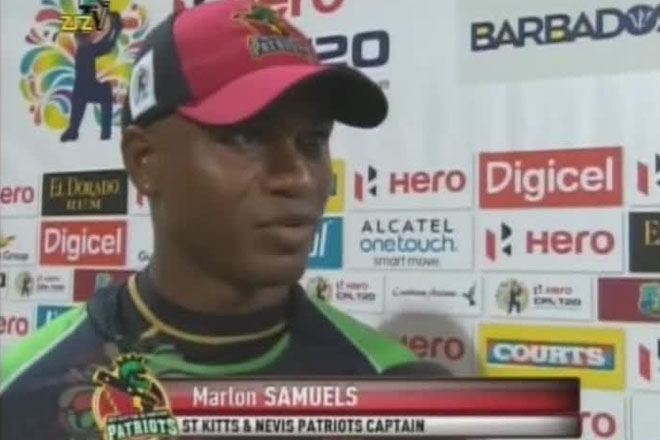 (ZIZ) — The St. Kitts and Nevis Patriots caused a major upset in the 2015 Hero Caribbean Premier League on Saturday when it handed the tournament-leading Barbados Tridents its first loss.

The Patriots entered the game with a 0-1 record after losing to St. Lucia earlier in the week, while the tridents were, until Saturday, undefeated on home soil at Kensington Oval.

The sensational contest went down to the final ball, with the Tridents needing three runs to win and two to tie, but Navin Stewart could only manage a single off the young Orlando Peters, who held his nerve.

Put in to bat first, the Patriots reached 143 for 8 from their 20 overs, with Peters leading the scoring with 27 runs. Martin Guptill added another 23 and Shahid Afridi chipped in with 19.

After the match, captain Marlon Samuels said he still believes the team had not played to its true potential.

“We definitely held our nerves. We played the condition of the game…we bowled our fast bowlers up front as much as possible because they were doing a pretty good job. But the condition changed and I had to go for Orlando Peters in the end there. A win is a win. We’re going home for seven days and it’ll give the guys a lot of confidence but I think we haven’t played to our true potential as yet,” he said.

Sheldon Cotterell and Sohail Tanvir were the two stars with the ball for the Patriots as they both ended with two wickets.

“Definitely they have come to party and I’m very happy for that and hopefully Cottrell and move from strength to strength by learning from Tanvir because we have a good balance of senior and new players coming in and they’re learning step by step and under pressure we came out victorious today,” he said.

The team returned home on Sunday for a seven-game stand at St. Kitts’ Warner Park, starting against the Jamaica Tallawahs on Tuesday June 30th.