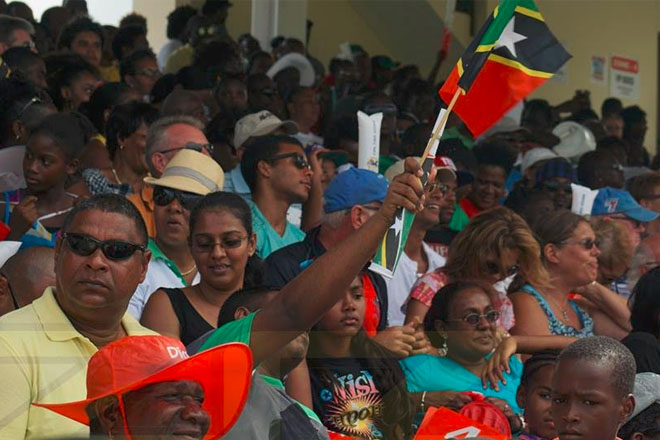 (ZIZ News) — The St. Kitts and Nevis Patriots ended its seven-match home stand in the Caribbean Premier League with a loss against the Trinidad and Tobago Red Steel on Saturday.

Now as the CPL excitement shifts to Jamaica, Guyana and Trinidad and Tobago, the fans in St. Kitts and Nevis are being commended for making it an experience like no other.

Over the last two weeks, Warner Park was the centre of attention for millions of viewers with ten exciting matches in the 2015 Hero Caribbean Premier League being played there.

These included seven matches being contested by the home team, the St. Kitts and Nevis Patriots.

Thousands of cricket loving fans, sporting the colours of the national flag and that of the SKN Patriots Team, visited Warner Park’s Cricket Stadium over the two-week period.

This support did not go unnoticed by team Captain Marlon Samuels.

“With the support of St. Kitts, it’s been magnificent and with support like this you can only want to do well,” he said.

Manager of the St. Kitts and Nevis Patriots, Richard Berridge also weighed in on the support of the local fans.

He said over the past two weeks, they witnessed an increase in demand for Patriots’ merchandise.

“Awesome! Awesome! I knew people would have come out but the energy and intensity that we got from the crowd I think it helped us. Like I said, we would have liked to finish with a better record but the West Mounds and the stands last night (Friday 10th) were all sold out and I think today (Saturday 11th) they were nearly at 95 percent capacity and again we want to stress on thanking the fans for coming out and support. From a merchandise standpoint, we’ve seen the fans buying them up. It’s actually been a challenge keeping up with the demand,” he said.

Similar sentiments were also echoed by the Chief Operating Officer for the CPL, Pete Russell. Speaking with ZIZ News, Russell said everyone here should be proud of the home team.

“It’s been amazing. For almost two weeks this stadium has been packed. I think the experience last night (Friday 10th) when literally I thought the stadium was going to take off such was the noise level so I think the team has done you proud; everyone who has worked on the event down here has done you proud so it’s been a fantastic experience. I just hope they win their last game and make it to the semis,” he said.

After Saturday’s match, the players walked around the grounds at Warner Park in a show of appreciation to the thousands of home fans.

The St. Kitts and Nevis Patriots will be playing its final preliminary round match against the Trinidad and Tobago Red Steel at Queen’s Park Oval on Saturday July 18th. That match will be carried live on ZIZ Television at 12 pm.