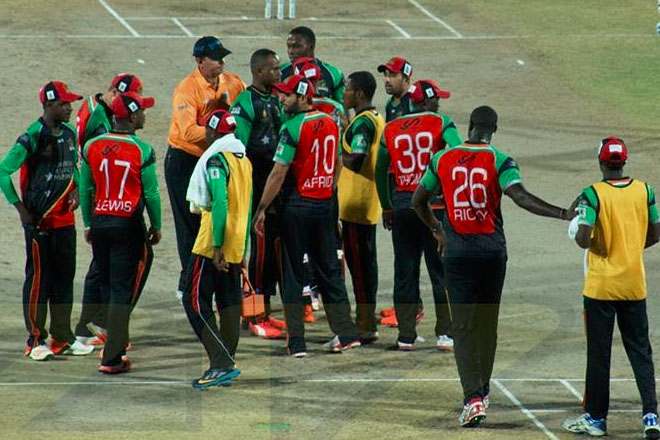 Patriots Lose As Match Is Abandoned

(ZIZ News) A poor bowling performance from St. Kitts and Nevis, followed by a superb batting display by Guyana’s Brad Hodge saw the Amazon Warriors winning its second match against the Patriots in the Hero Caribbean Premier League.

Rain interrupted the Amazon Warriors’ run-chase of 158 for 6 three times, but Hodge, regarded as the most experienced T20 player in the world, led his team to an 8-wicket Duckworth-Lewis victory at Warner Park.

Hodge finished with 61 not out from 36 balls, with opener assad Fudadin stroking 43 runs. Earlier in the inning, it was captain Denesh Ramdin who provided the spark for the warriors with 31 runs off 15 balls.

Earlier, Marlon Samuels was again the star with the bat for the Patriots after making 61 off 40 balls. He was the only Patriots player to score more than 19 runs.

Openers Martin Guptill and Evin Lewis were dismissed cheaply with 10 and 14 runs respectively.

Along with the loss, the St. Kitts and Nevis Patriots were dealt a huge blow when their star bowler from the last two matches, Tabraiz Shamsi, pulled up injured early into his first spell.

Although he returned to bowl, he was clearly not comfortable bowling and was removed from the attack.

Wednesday’s match also saw lone Kittitian player, Jacques Taylor getting his first feel of an actual match when he took to the field in the second innings.

The Amazon Warriors have now moved into fifth position while the Patriots remain in third place with three more matches to go.

The team’s next opponent will be the St. Lucia Zouks on Friday at Warner Park.