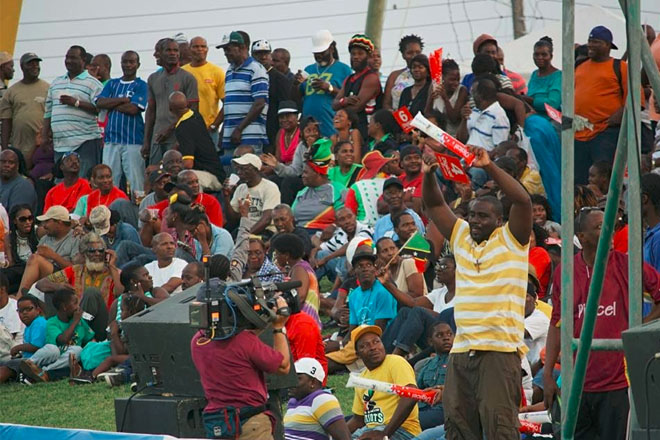 (ZIZ News) — Thousand of Patriots fans left the Warner Park Cricket Stadium Tuesday evening disappointed after the St. Kitts and Nevis team lost a close encounter to the Jamaica Tallawahs as the Hero Caribbean Premier League bowled off in the Federation.

Playing its first match at home, the Patriots posted a competitive target of 160 for the Tallawahs.

Martin Guptill led the scoring for St. Kitts and Nevis with 53 runs. Captain Marlon Samuels also scored a half century with 50 from 31 balls while Nevisian Tonitto Willett, playing in his first match of the tournament, finished with 31 from 28 balls.

Led by Chris Gayle with an unbeaten 72 runs, Jamaica reached its target with just 5 balls to spare.

Despite the loss, Patriots’ coach Eric Simons commended his players for their efforts, adding that there are a number of positives they can take away from the encounter.

“I think we learnt a lot about the grounds to start with and how the wicket plays and how we need to play. It’s just the old lesson of cricket, you have to take your chances. I think we’ve taken the odd catch in crucial moments. It could’ve been different but obviously Chris played a really good innings…but otherwise, as always there’s some positives and some things to learn from it so that’s what you have to do,” he said.

The St. Kitts and Nevis team failed to capitalize on two chances to remove Gayle from the crease. Coach Simons said those proved to be costly mistakes.

“I think obviously when the team gets it the way they did you can say you were two or three runs short but you thought maybe in-between towards the back end of the innings we looked for too many boundaries as opposed to reading the wicket and knocking the ball around for ones and twos. And then, slow thinking. If we had taken our chances with taking the odd catch at crucial moments I think we could have defended it, ” he said.

Chris Lynn, who scored 52 for the Tallawahs, said it was an all around performance that helped his team to the win.

“Obviously there’s a lot of hype around a small field and a nice wicket to bat on. I think we bowled pretty well during that middle period. We didn’t bowl too well but we fought back nicely and then they had a bit of a partnership, but that’s the way that it goes from a batting point of view. Obviously I was looking to attack early, trying to use that power play. It worked tonight, you know sometimes it doesn’t. But fortunately, for myself it worked,” he said.

The Hero Caribbean Premier League continues on Wednesday with the St. Lucia Zouks facing off against the Barbados Tridents at Warner Park.