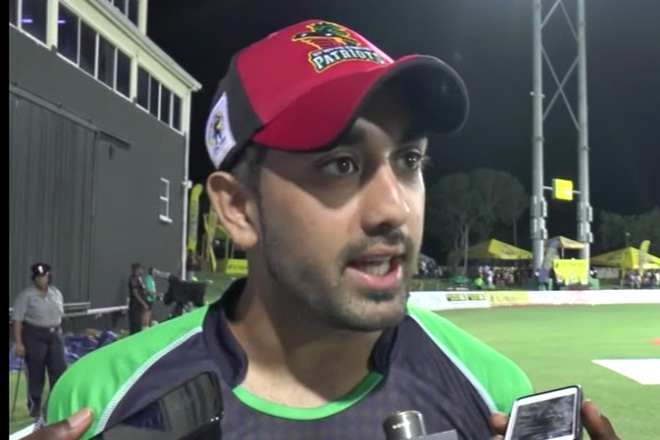 (ZIZ News)
A second consecutive superb bowling performance from the St. Kitts and Nevis Patriots saw them register their third win of the 2015 Hero Caribbean Premier League season and their second against the Barbados Tridents.

Tabraiz Shamsi followed his 4 for 23 performance against Jamaica Tallawahs with an even more impressive 4 for 10 as the Patriots restricted the Tridents to just 135 for 8 from their 20 overs, a target that the Patriots chased in 17.1 overs for the loss of only two wickets with Marlon Samuels scoring 71 not out off 54 balls.

Shamsi said it was another all-round performance from the tournament newcomers.

“It’s another big CPL team, another convincing victory so a lot of credit goes to the boys, the management, all of the guys involved, even behind the scenes. It’s a complete squad effort and we’re really looking forward to the other games coming up now,” he said.

He also commented on his recent performance with the ball, after taking a total of eight wickets in his last two games.

“I’m just really fortunate that things are going my way in the last couple of games especially. We know T20 can be a brutal game for bowlers so another day you can come and bowl exactly the same and get hit for 50 and everyone’s saying we’re bowling badly. Meanwhile, I still firmly believe it’s a batsman’s game so I’m just really, really thankful that it’s going my way,” he said.

Shamsi also commended the home crowd for its support over the last few matches at Warner Park.

“Every time you are winning games the energy will, naturally, be better. But we’re enjoying the crowd that’s coming out and supporting us at Warner Park. You know, finally having a local team to support. So we’re just glad we can give the guys something to cheer about. And the people are enjoying themselves off the field and the players enjoy themselves on the field,” he said.

With Monday’s win, the St. Kitts and Nevis Patriots consolidated its position at third in the league table.

The Patriots will be back in action on Wednesday against the Guyana Amazon Warriors.