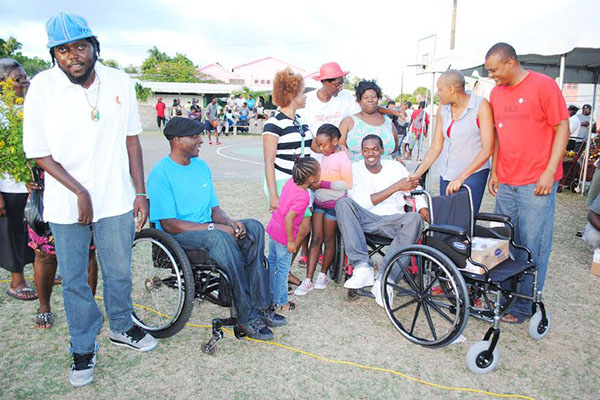 PEP has given me a second chance, says victim of gun violence

Basseterre, St. Kitts — Wheelchair bound Mr Antonia Richardson of Prickly Alley in Basseterre, who was paralysed five years ago after he was struck by a stray bullet and left at the mercy of the general public, is thanking the People Employment Programme (PEP) for giving him a second chance in life.

“PEP has given me a good opportunity in a lot of ways,” said Mr Richardson. “Before PEP started sponsoring the computer graphic class at the McKnight Community Centre I used to be home lying down and troubling people. Everybody body I see I would ask for assistance.”

Mr Richardson who is a student of the computer graphic design class that is facilitated by the St. Kitts and Nevis Association of Persons with Disabilities and sponsored by PEP made the remarks on Good Friday (April 18) at the Gardens when he received a new wheelchair from Mr Geoffrey Hanley, the PEP Project Manager.

“Because of PEP I am getting back my self esteem,” said Mr Richardson, who was accompanied by his daughter Aamiyah. “I used to do electrical work before my injury, but with the computer studies that PEP is sponsoring me I hope to start my own business doing graphic designs.

“I want to thank PEP because when people see you in a situation like this they think that you cannot work again. I want to thank Geoffrey Hanley and PEP for giving me a second chance.”

Presentation of the wheelchair was done in the middle of events at a fun day organised by the Minister of Health, Culture and Social Services the Hon Marcella Liburd, where PEP Project Manager Mr Geoffrey Hanley handed it to Hon Liburd, who is also the area representative for the recipient of the wheelchair.

“Mr Antonia Richardson who is one of the students of the PEP Computer Graphic Art Designs at the McKnight Community Centre approached me and said that he wishes to be more independent and that his wheelchair was a hindrance,” explained Mr Hanley.

“I had seen him in class where he is doing well and going to the electronic chalkboard to show others his skills, and I felt that we at the People Employment Programme should assist him to realise his full potential by providing him with the wheelchair that he badly needed.”

Minister Liburd, who was accompanied by the Permanent Secretary for Community and Social Development, Culture and Gender Affairs Ms Sharon Rattan, thanked PEP for the donation and hoped that the wheelchair would go a long way in making Mr Richardson a productive person in the society.

Witnessing the handing over of the wheelchair was President of the St. Kitts-Nevis Association of Persons with Disabilities, Mr Anthony Mills, who while thanking the People Employment Programme (PEP) for responding to the call of one of its members, also called on individuals and organisations to assist some of its needy members.

“We have to thank PEP for coming to the aid of Antonia Richardson at the time when he really needed it. Also we would want to say to those out there in the public who can donate, that there is always need for more because aids like walkers, crutches and wheelchairs as we always get requests for them and most of the time we do not have them.”

Mr Mills explained that more donations of that kind would help a lot more people to be able to come to the classes and be able to lead more independent lives as they will have a way of getting around. He said that it was not just young people with disabilities but also older people who would need to get crutches, walkers and wheelchairs.