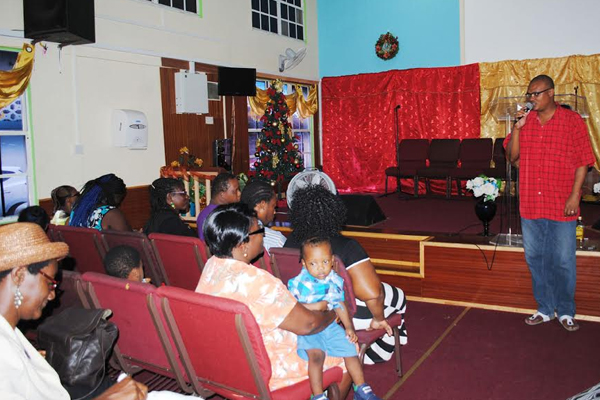 Basseterre, St. Kitts — Project Manager of the People Employment Programme (PEP), Mr Geoffrey Hanley, has advised members of the St. Kitts Nevis Association of Persons with Disabilities (SKNAPD) that the programme will continue to support them even into the New Year.

Association’s members who are students of the PEP Microsoft Office Class that meets at the McKnight Community Centre had joined the other members of the SKNAPD at the Word of Life New Testament Church on Central Street, Basseterre, on Thursday December 18 where they held a Thanksgiving Service to celebrate birthdays of two of their members.

“It is indeed a pleasure for me to be here celebrating with you,” said Mr Hanley at the church. “The PEP is delighted to continue to be of support to the persons living with disabilities. This is one of our legacy marks that you would have for 20 years as the PEP programme will continue.”

Holding a joint birthday celebration were Corporal Joseph Bergan who is the Vice President of the SKNAPD, and Ms Sharon Fredrick who is a student of the PEP Microsoft Office Class. Secretary of the association Ms Mary Clarke is the one who had made the arrangements for the service after she would have consulted with PEP officials.

“The fact that we were able to partner with you, and we have seen persons who might have been in their homes for five or six years they didn’t really have anywhere to go, now that they are out they feel really a part of society,” observed Mr Hanley. “I am quite satisfied that a burden has been lifted from parents knowing that they are comfortable with the places where their loved ones are going.”

He told members of the PEP Microsoft Office Class that they would be treated like all the other People Employment Programme participants in the Federation, confirming to them that consistent with the announcement by the Prime the Rt Hon Dr Denzil Douglas that a double salary would be paid, they too had benefitted.

“If you were able to go to your bank account you will recognise that the persons living with disabilities were not left out,” explained Mr Hanley. “You did not get double salary but you had five weeks pay which is your Christmas bonus – which is a month’s pay and you are weekly paid as you would have worked this week.

“On behalf of the management of the People Employment Programme, I want to wish Ms Sharon Fredrick birthday greetings and each and every one of you the very best for Christmas and we look forward to a productive 2015 as there is much more things for us to do in the New Year.”

President of the SKNAPD, Mr Anthony A. Mills, confirmed that the association conducts classes that teach people with disabilities to use computers and added that one of the celebrants, Ms Sharon Fredrick, has been teaching others to use the JAWS (Job Access With Speech) software which she learnt from Ms Lisa Hickson of Antigua, who is also blind.

The classes are sponsored by the People Employment Programme, and Mr Mills along with the secretary of the association, Ms Mary Clarke, are the facilitators and are being paid by PEP. All students in the class are also paid weekly wages by PEP.

The Thanksgiving Service was conducted by Bishop Matthew Hepburn who was presented with a Christmas greeting card that had been designed and produced by one of the students in the PEP Microsoft Office Class, Mr Antonia Richardson. Mr Mills also stated that the programme in use was also produced by the students.