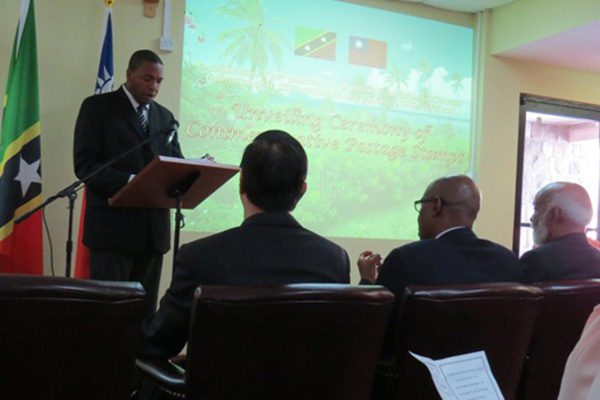 Phillip: St. Kitts and Nevis and Taiwan relations “the perfect example of harmonious and cordial ties that redound to the benefit of our two nations.”

Basseterre, St. Kitts (CUOPM) – Minister of Posts, the Hon. Glen Phillip is showcasing to the world the 30 year diplomatic relations between St. Kitts and Nevis and the Republic of China (Taiwan) as “the perfect example of harmonious and cordial ties that redound to the benefit of our two nations.”

“These benefits we have experienced in the areas of agriculture and agro-processing, light manufacturing, sporting and social infrastructure development and trade and investment.  As a result of these, our businesses continue to seek new and innovative opportunities through the establishment of cooperative agreements with their Taiwanese counterparts; our peoples have excelled at Taiwanese universities or have participated in cultural immersion tours and above all, to cement this harmonious relationship, St. Kitts and Nevis did, in 2008 open an embassy in Taipei, which then Foreign Minister James Huang said would serve as a bridge strengthening the friendship between our two countries,” said Phillip at the unveiling of postage stamps commemorating the long diplomatic relations of the Asian and Caribbean states.

Noting the words of French Legionnaire and President Charles De Gaulle who said, ‘France has no friends, only interests,’ Minister Phillip said the ceremony tells the world that St. Kitts and Nevis has found a friend in the Government and people of the Republic of China (Taiwan).

“Stamp collectors, the world over, will preserve, for time immemorial, these commemorative stamps that we unveil today as a testament to the lasting friendship and enduring cooperation that exist between our two nations. Those yet unborn will, through these stamps, know that although we lived in a world marked by turmoil and trouble, in 2014, lasting friendship and concord did exist between our two progressive societies,” said Mr. Phillip, pointing out that both governments pause to issue stamps bearing the likeness of the historic, economic, innovative and truly indigenous treasures of the two countries.

“These scenes include the magnificent Taipei 101 building and the proud remains of the Shi-yu Fortress which both showcases modernity and abiding strength that possess the Taiwanese people. The stamps also include scenes of charming Port Zante; a pillar of the modern St. Kitts and Nevis economy and the stoic columns of Brimstone Hill; the historic Gibraltar of the West Indies. In addition to these, the stamps highlight areas of economic and technical assistance which the people of St. Kitts and Nevis have received through the outgoing and on-going generosity of our Taiwanese friends. These efforts include scenes of the recently inaugurated Solar Farm at the Robert L. Bradshaw International Airport as well as the Agro-Tourism Demonstration Farm at Sir Giles, St. Anne’s.   Finally, there are commemorative stamps that capture the highest physical points of both our beautiful countries, namely Jade Mountain of the Yushan National Park in Taiwan and Mount Liamuiga, here in St. Kitts and Nevis,” said the Minister of Posts.

“Together and individually, these stamps will serve as abiding testimonies to the most perfect bond into which our leaders and peoples entered thirty years ago and in which we stand tall and proud for all the world to see.  For these reasons and more, as the Minister charged with responsibility for Posts, I consider it my must humble duty yet significant honour to have these stamps commissioned that herald thirty years of friendship and partnership between our two countries and our peoples,” said Minister Phillip, who also holds the portfolios of Information Technology, Youth and Sports.