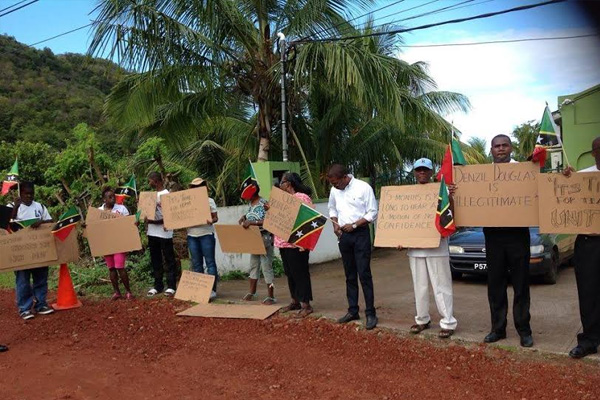 Picketers in St. Vincent standing with Dr. Harris “were clueless”

Basseterre, St. Kitts (CUOPM) – Reports out of St. Vincent and the Grenadines indicate that a majority of the small number of persons standing with St. Kitts and Nevis’ opposition legislator, Dr. the Hon. Timothy Harris, one mile away from the venue of the 25th Inter-Sessional of the Conference of the Caribbean Heads of Government, were clueless as to what they were demonstrating for.

“While CARICOM leaders were at the Buccament Bay Resort discussing a series of matters pertinent to our Caribbean Development and Integration, a peaceful protest was being staged less than a mile away to bring attention to the political impasse in St. Kitts and Nevis. However in an interesting twist, some of the protestors were clueless as to why they were picketing,” a St. Vincent Television presenter said as the introduction to the news story.

“More on this report by Jamisha Wright:

Jamisha Wright: You are all locals right, you all are Vincentians?

Jamisha Wright: Okay, tell us why you are out here today.

Female Protestor # 1: I am out here to demonstrate for St. Kitts.”

Jamisha Wright: Why you see such a need to lend support to St. Kitts?

Female Protestor #1: Because they are very important and we are all one country.

Jamisha Wright: Tell us why are you are out here today?

Female Protestor #2 : Well, I can’t even say why really, because I didn’t know it was this thing. I thought it was just a normal meeting ,but anyhow, never the mind I come still and I am enjoying myself and it’s so good to be out here looking at the platform and everything and demonstrating with St. Kitts and Nevis. I don’t know what is the problem really, but I just come and support it still.”

Jamisha Wright : How about you? You lending support to St. Kitts and Nevis?

Jamisha Wright : You are carrying a placard that says ‘Free St. Kitts and Nevis.’

Female Protestor #3): I am here for them to free St. Kitts and Nevis. We are one Caribbean.

The opposition took the matter to the High Court and a Judge has ruled that the original motion filed by the opposition legislators would be allowed to continue against the Speaker, the Hon. Curtis Martin.

The other defendants, including Prime Minister the Right Hon. Dr. Denzil L. Douglas and members of his Cabinet, have been removed as parties to the originating motion. The Court ruled that there was no evidence that Dr. Douglas or his ministers had prevented the Speaker from having the motion tabled.

Last week, Prime Minister Douglas said his administration would await the outcome of the court ruling on the Motion of No Confidence.

He said the substantive matter of the motion of no confidence was still sub-judice.