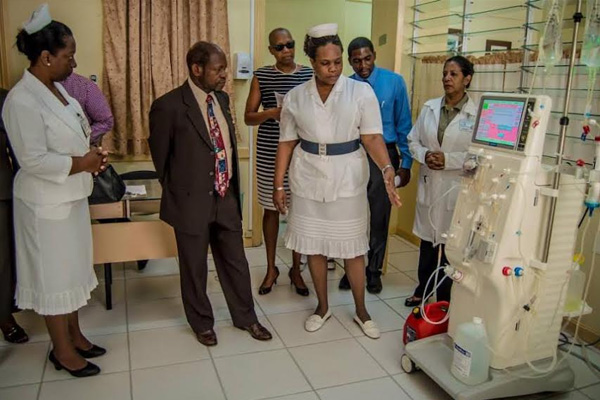 PM continues out and about visits to Pogson and JNF

Basseterre, St. Kitts (SKNIS): Prime Minister the Right Honourable Dr. Denzil Douglas recently viewed firsthand the eco-friendly retrofitting work at the Posgon Medical Centre at his 6th Out and About with the PM.

The work included the installation of LED lighting fixtures, emergency access and safety doors and energy efficient devices such as solar water heaters and air-conditioning units. There were also upgrades to the plumbing fixtures and electrical systems, improved fire safety and egress and upgrades to handicap accessibility, upgrades to the security system and the establishment of a water harvesting system.

Operations Manager Lornette Adams, who led the tour, stated that the benefits of having such a facility include reduction of greenhouse gas (GHG) emissions; saving money on water and electricity bills; improvement in air quality; enhanced physical accessibility to the hospital; harvesting of rain water; higher level of comfort for patients; improved safety conditions and increased awareness of Climate Change and the need for environmentally safe operations.

The tour continued to the Joseph N. France General Hospital where a number of labs have been upgraded and outfitted with new equipment.

The x-ray department has been converted from an analogue to a digital system which boasts benefits such as emailing a patient’s results to a specialist and even giving the patient his/her results on a CD. In the pathology laboratory, a haematology analyzer which produces results in a fast and great quantity, a covert analyzer that tests for drugs and an HB1AC, which is a monitoring tool for diabetic patients, has been installed.

In addition, the Prime Minister was escorted to the new Haemodialysis Unit which was opened in September 2013.

After his tour, he sat down with managers and employees who proposed improvements and discussed areas of concern that Prime Minister Douglas assured would be speedily addressed.

The Out and About series can be viewed on YouTube by running a search for TheSKNIS.