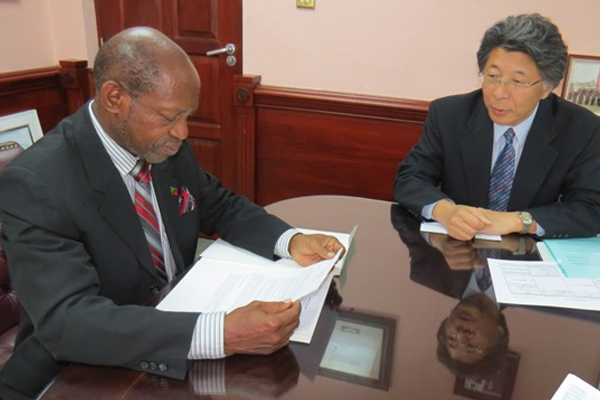 Ambassador Tezuka provided details of the first-ever Japanese-CARICOM Summit which includes a dinner hosted by the Japanese Leader on July 27th, the Summit on the 28th, which ends with a joint CARICOM-Japan press conference and bi-lateral meetings with each Caribbean President and Prime Minister.

According to a CARICOM statement, The Summit’s agenda includes discussion on the vulnerabilities of CARICOM and the necessary cooperation for its sustainable growth; strengthening exchanges and the bonds of friendship and deepening cooperation in the international arena.

“At a time when regions across the world are engaged in discussions on the priorities for the post 2015- development goals and the upcoming Third United Nations Conference on Small Island Developing States (SIDS), this September, in Samoa, the Summit provides a timely opportunity to advance CARICOM’s priorities in these areas and for fostering solidarity between CARICOM and Japan,” said the statement.

It noted that the Japan-CARICOM Summit comes on the heels of the 35th meeting of Heads of Government which approved the Community’s Strategic Plan for the next five years (2015-2019) which includes deepening foreign policy co-ordination among its priorities.