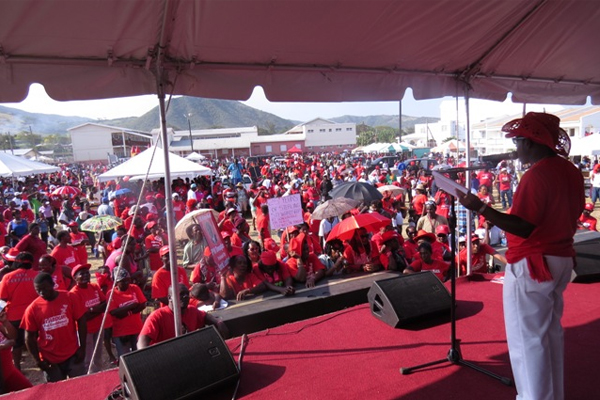 Addressing the huge gathering, the St. Kitts and Nevis leader said that there is a lot to cheer about, that government having increased the minimum wage for weekly paid government workers will encourage employers in the private sector to follow suit and warned of opposition plans to cut back on benefits they are now enjoying.

“Comrades, I want to remind you that Labour will never die in this country; Labour must be kept alive, Labour is alive and well. You’ve seen the thousands march through the streets of Basseterre. You’ve seen the thousands standing on the side; you’ve seen the young people in particular that continue to support us; you’ve heard the four springtime young men who have come forward to carry this movement forward,” said Dr. Douglas at the end of the march at the Patsy Allers Recreation Ground.

“Labour will never die, Labour will live forever; live in our hearts, in our souls, in our step, in everything that we do. Labour will be alive and soon I say to you, I want Labour to be fully mobilized because that day is soon to come when Labour will go back to the polls and show who is man and who is boy in St. Kitts and Nevis,” said Dr. Douglas, who is also the National Political Leader of the governing 84-year-old St. Kitts-Nevis Labour Party, sister organisation to the St. Kitts-Nevis Trades and Labour Union.

He told the Nation that his four-term administration has made sure that if any worker in this country has been with an employer for 10 years or more and they want to move overseas, start a new business, or work somewhere else, they will, for the first time in the history, be able to get a gratuity.

“Only Labour can do that, no other party, no other movement can do that but Labour. I want to say to you that in the past, you would walk away empty handed, today that cannot happen because your caring government has put in place the necessary structures by way of legislation that will give every single worker for 10 years or more at a work place, a gratuity, as he moves on to a new career or if he goes overseas to live,” Dr. Douglas reiterated.

“Today, I remind us that we cheer because this Government has once again increased the minimum wage for all Government workers, and in doing everything in our power that we are seeking to do. We are asking every other employer of this country to do likewise, follow the Government by increasing the minimum wage from $320, even though it is already the highest in the Eastern Caribbean; increase it so that you, the workers can benefit with a higher wage as we know that the cost of living is very challenging today,” said Prime Minister Douglas.

“Your government will use the next few weeks and months to encourage every single employer in this country to do like the government and increase the minimum wage for their workers,” said Prime Minister.

Dr. Douglas said there is a lot to celebrate and cheer because the children of the workers of St. Kitts and Nevis have more opportunities today than ever before to secure scholarships and loans in order to advance their training and their education.

“Just look around this country. Look around it today and you will find a sea of people who look just like you and me, and who are now standing tall as our plumbers, doctors, electricians, parliamentarians, engineers, building contractors, farmers, lawyers, artists, businesspeople, mechanics, civil servants, architects – all because of the educational loans, the scholarships, and the opportunities that this Government pushed to deliver to workers and their children,” said Prime Minister Douglas.

He urged workers and that people of the Nation to listen to what the Opposition is saying.

“They are going to cut back spending if they were to get into government. You know what that means? When Timothy Harris and his family would have already been educated at the expense of your money and my money, he is going to cut it back so that your children can no longer get the opportunities that he has already benefited from. It means that you will not be able to get your houses that we will continue to build, to improve the living conditions of our people and make sure that asset-rich and not asset-poor as you have been over the years,” Prime Minister Douglas said.

“We cheer because the PEP has been introduced! And you have seen their handy work on the streets today. Because PEP has given thousands of young people powerful opportunities to get training, work experience, change their career parts and all kinds of opportunities to get ahead here in this their very land of birth where they born,” Prime Minister Douglas.