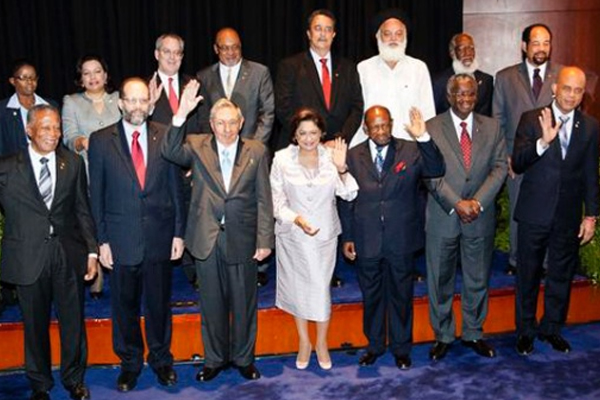 Prime Minister Douglas is supported at the meeting by the Federation’s Permanent Representative to the Organisation of American (OAS), Her Excellency Jacinth Henry-Martin; the Havana-based St. Kitts and Nevis Ambassador to Cuba, His Excellency Kenneth Douglas and Foreign Service Officer, Ms. Verna Morris.

The Fifth Cuba-CARICOM Summit, which will take place on Monday has several issues including trade, investment, and education ties on the agenda. It was preceded on Sunday by a meeting of the region’s foreign ministers.

In addition to the deepening of investment and trade ties, the summit aims at the strengthening of a broad range of Cuba-Caribbean cooperation initiatives related to education, health, poverty reduction, culture, sports, and climate change, the Caribbean media have explained in the lead-up to the summit.

Arriving in Havana on Saturday, Grenada’s Prime Minister Dr. the Hon. Keith Mitchell said that he appreciated Cuba’s contribution to health and education projects in the region, noting that his country would play its part in international forums to challenge the United States to lift its economic blockade of the country, Cuban newspaper Escambray noted.

Cuban educational aid initiatives have included the provision of scholarships to hundreds of students from the Caribbean to study in Cuba.

Dr. the Hon. Ralph Gonsalves, the Prime Minister of St. Vincent and the Grenadines, noted upon arrival at the Cuban capital that, “we have to work together in this globalized world to address international issues affecting our hemisphere. This includes demanding an end to the economic sanctions against Cuba.”

The prime minister also called for the freeing of the Cuban Five, a group of Cuban nationals suspected of spying in the United States.

Trinidad and Tobago ambassador Jennifer Jones-Kernahana noted that the summit will assist in the strengthening of regional ties, allowing the region to act as a bloc with common interests in world affairs, Telesur explained.

This may include the formation of a common position on issues such as the United Nations’ Post-2015 Development Agenda.

The first Cuba-Caricom summit took place on December 8, 2002, marking the thirtieth anniversary of the establishment of diplomatic relations between Cuba and Barbados, Guyana, Jamaica and Trinidad and Tobago in 1972, with the four countries rebuffing United States diplomatic pressure not to do so. The event has taken place every three years since 2002.

The Caribbean Community organization itself was founded in 1973 as a trade organization amongst Caribbean nations; its goals including the promotion of economic integration, development planning, a common market, and the coordination of foreign policy.

The events of the Fifth Summit of the Caribbean Community started with the ceremony to mark the anniversary of the death of the Cuban independence hero, Antonio Maceo.

Some heads of state of Caribbean countries attended an event Sunday morning to mark the 118th anniversary of the death of death Antonio Maceo, Cuban Independence leader.

The event took place at the Cacahual Monument, where the remains of the independence hero lie along with the remains of Francisco Gómez Toro “Panchito,” battle partner of Maceo, who also died on December 7, 1898, during the San Pedro battle.

During Sunday’s event, the commemoration of the 25 anniversary of Operation Tribute, also took place. The tribute aimed to mark the date when the Cuban population celebrated, in 1989, the Cuban heroes who died fighting for the independence of some regions of Africa.