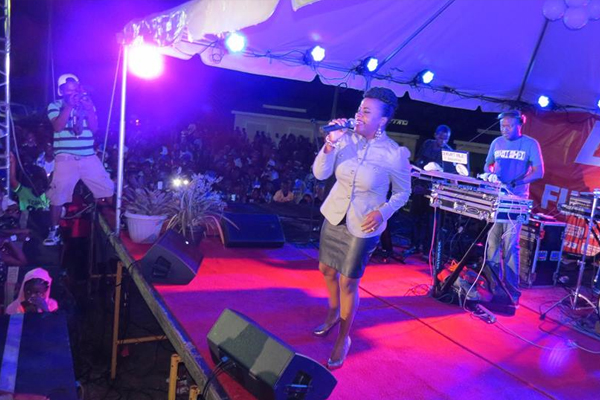 “Black Rocks again shows that the Labour Party continues to attract strong followers and confirms with full confidence, that we are stronger, better and ready,” said Prime Minister Douglas in an invited comment to the thousands that attended the annual affair.

SKNVIBES added that the event, which kicked off around 12 noon yesterday (Apr. 21), saw a number of activities being done, including a vibrant entertainment showcase that featured local bands and calypsonians such as King Rockafella and King Ayatollah.

In her 45-minute performance, the goddess of Reggae music quickly drew a massive crowd to the front of the stage while she performed some of her greatest hits, such as ‘Free’, ‘I am not Afraid’ and her new single ‘Trigger’.

Etana also mixed her performance with a number of Reggae hits which had the enormous crowd asking for an encore. She acknowledged their request, returned onstage and gave her fans three more songs which lasted for about 15 minutes.

SKNVIBES also said that before returning onstage and during her ‘I am not Afraid’ performance, the Prime Minister of St. Kitts and Nevis and Leader of the St. Kitts-Nevis Labour Party, the Rt. Hon. Dr. Denzel L. Douglas, joined Etana onstage for a brief moment, much to the crowd’s delight.