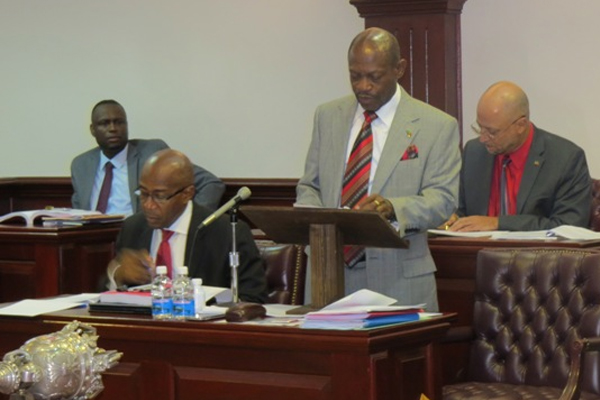 Basseterre, St. Kitts (CUOPM) — With the St. Kitts and Nevis economy poised to record a second consecutive year of positive growth demonstrating resilience in the face of the lingering effects of the global economic and financial crisis, Prime Minister and Minister of finance, the Rt. Hon. Dr. Denzil L. Douglas said Tuesday that the pillars of the Nation’s economic foundation have been strengthened.

“We are now reaping the gains from the comprehensive structural reforms of the last decade, particularly the past three years. We have witnessed a turnaround in the economy which is buttressed by a significantly reduced public debt and a strong fiscal position which my Government intends to maintain into the foreseeable future,” said Dr. Douglas as he delivered the 2015 Budget Address.

Dr. Douglas told the Budget Session of the St. Kitts and Nevis National Assembly that the policies and actions of his four-term Labour Party Government have created an environment that will facilitate sustained growth, a better quality of life for the people and continuous improvements in the infrastructure that will undoubtedly encourage further investments in the country.

“We are ever mindful of our role as a Government and the activities that must be undertaken to achieve our goals. These activities are numerous and have been carefully prioritized so that they can be financed from the resources that we expect to have at our disposal. It is therefore essential that we collect the revenue that is due to the Government as this is the means by which we finance our programmes and activities. This is not always an easy or pleasant task but it is necessary if we are to have sufficient resources to properly provide the services and infrastructure that are demanded of us without increasing our debt,” Prime Minister Douglas said.

Government he said has invested in the revenue collecting agencies and have encouraged them to ensure that the tax laws are administered and enforced in an efficient and effective manner.

Prime Minister Douglas said once collection is executed as envisioned, and based on the level of economic activity that is expected for 2015, he is projecting that Recurrent Revenue for the 2015 fiscal year will be EC$657.4 million.

“This would be EC$140.1 million or 27.1% more than our estimate for 2014. Taxes on Income are expected to generate EC$86.3 million while Taxes on Property are expected to be EC$14.0 million. We are anticipating that Taxes on Domestic Goods and Consumption will be EC$111.3 million and Taxes on International Trade and Transactions, our largest tax category, will be EC$190.3 million. Non-Tax Revenue is projected to be EC$255.5 million for 2015. With an estimated EC$81.0 million for Budgetary and Capital Grants, Total Revenue and Grants are expected to amount to EC$738.4 million, 22.1% in excess of the 2014 estimate,” the Prime Minister announced.