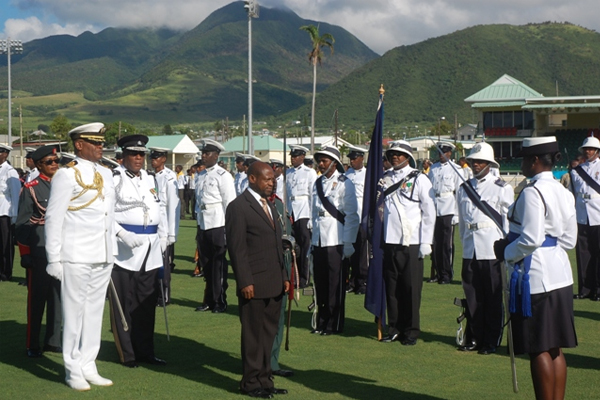 Basseterre, St. Kitts (CUOPM) – Decisions taken by Prime Minister the Right Hon. Dr. Denzil L. Douglas to reshape the Ministry of National Security/Homeland Security and the appointment of a new Commissioner of Police, has begun to bear fruits with the drastic reduction in crime.

During his weekly radio programme “Ask the Prime Minister” on Tuesday, Prime Minister Douglas noted the concerns three years ago about a rash of violent incidents inflicted upon young persons in the Federation by other young persons.

“For a while there, we were all deeply shocked and perplexed by these most un-Kittitian occurrences. And then, you will remember, the moment came when we decided that no matter how shocked we may have been, and no matter how perplexed, the time had come for bold and decisive action,” said Prime Minister Douglas, who recalled the major changes in terms of the country’s crime fighting strategies, approaches and leadership.

“There was some under-the-radar complaining at the time, yes, but the Government truly had no choice – or, to be more precise, I, as Prime Minister, had no choice but to impose whatever re-alignment, restructuring, and/or re-staffing I felt was necessary in order to bring to the good people of St. Kitts and Nevis the peace and security that we all need and deserve,” said the Prime Minister, who noted that his governing St. Kitts-Nevis Labour Government has invested heavily in an effort to reduce the incidence and crime and make the residents safer.

The Royal St. Christopher and Nevis Police Force recently reported a significant reduction in crime over the past several months.

“We can all feel the difference. We all know the difference. But, nonetheless, the statistics are now out, and I am pleased to be able to report to you the fact that in March of this year, crime in the Federation was 62% lower than in March of last year. This is very good news. In February of this year, as you may know, it was 37% lower than it had been in February of 2013. And just to take us back to the beginning of the year, crime in St. Kitts and Nevis in January 2014 was 41% lower than in January of 2013,” Prime Minister Douglas told listeners.

He is of the view that St. Kitts and Nevis has done it again through collaboration on several fronts.

“Working together, the police, the defense force, the private sector, our various communities and the Government decided that there were far more law- abiding people in the Federation than non-law-abiding, and we were not going to lose sight of that powerful fact. We decided that if we pulled together, each doing our part, we would all, as individuals and as a Nation, benefit tremendously. And that we have,” Prime Minister Douglas said.

His St. Kitts-Nevis Labour Government he pointed out has invested very heavily in heightened training, in forensics, in crime scene, analysis, ballistics, tactics and prevention.

“And our collaboration with regional and international partners in the areas of intelligence and best practices has been both wide and deep. The private sector, also, has been very generous in its support. And for that we thank them. In addition to the Government and the private sector, communities all across this Federation have been tremendous assets, providing valuable assistance to the police as the police have resolutely gone about doing their work,” said Prime Minister Douglas, who used the opportunity to reserve special thanks and praise for Commissioner C. G. Walwyn of the Royal St. Christopher and Nevis Police Force, and Commander Patrick Wallace of the St. Kitts-Nevis Defense Force.

“With the support of the men and women under their respective commands, the Commission and the Commander have produced great results for us all, and we are all in their debt,” said Prime Minister Douglas.

Police statistics show that crime in the Federation in March was down 62% from March in 2013.