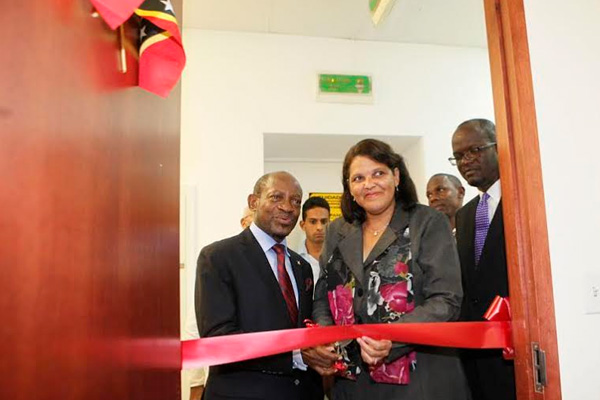 Basseterre, St. Kitts (CUOPM) – St. Kitts and Nevis cemented its 19-year-old diplomatic relations with the Republic of Cuba with the opening of an Embassy in Havana.

Prime Minister the Rt. Hon. Dr. Denzil L. Douglas speaking at the official opening noted that one his St. Kitts and Nevis Labour Government’s first diplomatic initiatives on taking office in July 1995, was to confirm diplomatic relations between both countries.

“The intervening years have seen a clear and steady strengthening of relations; relations grounded in mutual respect, mutual concern, and mutual support; relations that have affirmed our shared commitment to aid each other’s quest for self-determination in whatever ways our respective abilities allowed, and in response to whatever needs we each may have,” Prime Minister Douglas told the distinguished guests including ambassadors and diplomats from several Caribbean countries.

Describing the opening of the embassy as yet another milestone, Prime Minister Douglas who was greeted with great enthusiasm by the Caribbean diplomats, said it affirms a very solid history of cooperation and collaboration.

“A history of collaboration that has left a very positive and indelible mark on my nation, among the most powerful and transformative of these being the vast range of educational opportunities that have been provided to countless young, brilliant and bright nationals of St. Kitts and Nevis; nationals with a hunger for a university education, but uncertain paths to that dream,” said Prime Minister Douglas, who added:

“Education is the most powerful of liberators. And we are reminded that the generosity of the Cuban Government in providing scholarships to our nationals has not only liberated them as individuals but it has unleashed within our Federation, a range of skills, insights, and capabilities that have transformed families, communities, and indeed our Federation, as a whole. And so to the Government and the people of Cuba, we say yet again thank you, as we have so many times done before, and as we will so many times in the future re-enforce.”

Dr. Douglas pointed to the several areas of assistance from Cuba to the social and economic development of St. Kitts and Nevis.

“From health to agriculture, and from education to technology, from sports to conservation, and from architecture to (renewable) green energy, Cuba has transformed life in St. Kitts and Nevis for the better. Many who had thought that they would never again be able to see as they once had have travelled to those shores in the hope of having their vision improved,” said Dr. Douglas.

“Our citizens have returned to our Federation, having been a part of the Miracle Vision Mission, with new leases, literally, on life. Persons in need of specialized services in the areas of psychiatry, anaesthesiology, gynaecology, and paediatrics have been touched by the generosity of this government and the kindness of your health care practitioners,” said Dr. Douglas.